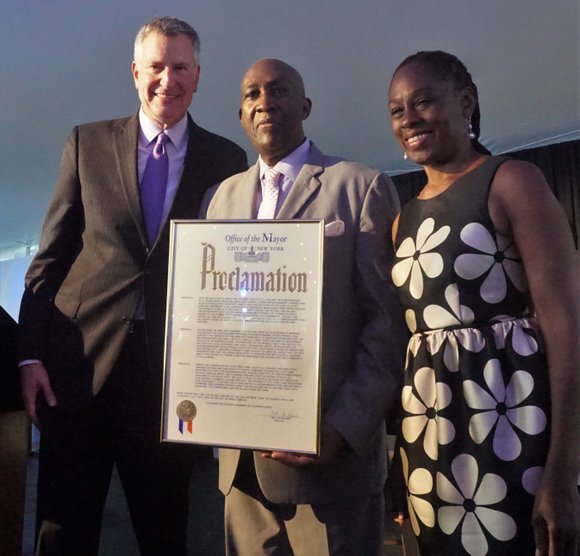 “Yes, it’s a lot like Cuba in here,” she said, “but not only because of the weather but because of the warmth of the people gathered here today.” She expressed her gratitude in being the first Cuban ambassador invited to Gracie Mansion and then recounted the discrimination Fidel Castro experienced in 1960 when he and other Cubans tried to get a hotel room in downtown Manhattan.

One of her most poignant moments came when she explained her complexion. “I am Spanish and African,” she said. “The Spanish is on the outside, and the African is on the inside. I can dance the conga and rhumba very well.”

She concluded, “I would like to thank Rep. Charlie Rangel because he made this festival a reality.”

The first Harlem/Havana Music & Arts Festival is from Aug. 15 to Aug. 21 and will include Cuban musicians, artists, dancers, chefs and educators. In February, a delegation of American artists and cultural leaders, including Smokey Robinson, will be going to Cuba as part of the cultural exchange.

There was a musical performance from “The Color Purple” by Angela Birchett, who was introduced by NY1’s Cheryl Wills, the mistress of ceremony, and an award ceremony at the close of the Gracie event before the music and food commanded attention, although the crowd did pause for the words of thanks from Giselle Cortez, director of Blue Cities for JetBlue. JetBlue is the official airline of the festival.