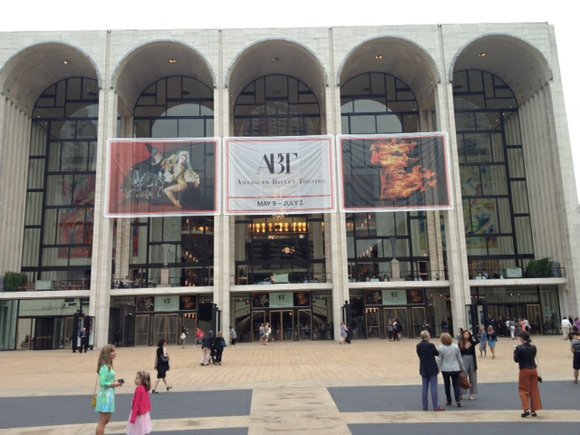 This year, American Ballet Theater’s spring season marked a historic milestone. It was the first full season for the first African-American principal ballerina in that company’s 75-year history, Misty Copeland.

During ABT’s eight weeks at the Metropolitan Opera House in Lincoln Center, Copeland starred in a number of dramatic works synonymous, for many, with classical ballet: “Swan Lake,” “Romeo and Juliet” and “Sleeping Beauty.” She also danced the lead in the charming, light-hearted “La Fille Mal Gardee,” the swashbuckling comedy “Le Corsaire” and the exotic “Golden Cockerel,” as well as the Bluebird pas de deux in “Sleeping Beauty.” Her appearance in ABT resident choreographer Alexei Ratmansky’s critically acclaimed “Firebird” was even a centerpiece of ABT’s PR campaign for this season. In fact, a gigantic banner draped across the front of the Met, ABT posters and brochures and newspaper ads featured Copeland in the bright red “Firebird” costume, on pointe, her head and torso thrust forward with ribbons of yellow flames flickering behind her. When was the last time a Black ballerina was prominently featured in a major American ballet company’s ad campaign? Yeah, this ABT season was historic on many levels.

Yet, despite the potentially distracting glare of the spotlight, Copeland deftly navigated the maze of demanding roles, displaying a fine technique, distinct musicality and delightful dramatic ability in depicting a wide range of engaging characters. In “Romeo and Juliet,” she was a teenager on the brink of womanhood swept up by love’s passion and plunged into tragedy by a fatal family feud. In “Swan Lake,” she was both Odette, doomed to be a swan by day and woman by night, and Odile, her seductive devious doppelganger. In “Firebird,” she was the exotic, proud, powerful mythical creature of Russian fairy tales.

But, let’s face it, because of what some call the “Misty effect” and the fact that in art, too, Black Lives Matter, a look at Copeland’s 2016 season demands a more panoramic view. That is evident not simply on the Met’s stage but also on other stages, in ABT’s audience and in other audiences, in dance reviews, in cyberspace and beyond. (One facet of the “Misty effect” is the attention to a subject I first wrote about decades ago as the first Black critic for Dance Magazine—Blacks in Ballet. But I digress.)

Whether real or imagined, when Copeland performs, there is magic in the air and, as Jesse Williams says, “Just because we’re magical doesn’t mean we’re not real.” Although ABT does not, as yet, have any available stats to bolster folks’ widespread impression, many believe Copeland’s performances are box office magic. When purchasing my tickets at the Met box office, a ticket agent noted Copeland’s performances were selling out fast. The Met is a 3,800-seat house!

Valentino Carlotti, Copeland sponsor, ABT board member and Goldman Sachs partner, said during a recent interview, “It is quickly apparent upon walking into a performance in which Misty is dancing that the audience is more diverse than it generally is at the ballet. I see Asians, Blacks, whites, people from all different backgrounds, races and ethnicities. I think one of the things they’re drawn to is the Misty story, but when you go to the ballet you’re not going to hear Misty’s story, you’re going to watch the ballet.” What you leave remembering is “the power of her artistry, her elegance, her grace, her perseverance, her strength.”

The new ABT audience is diverse. Mothers of all ethnicities come with little girls in tutus or clutching dolls. Church ladies proclaim, “I never thought I’d see the day . . .” Groups of school kids lean forward in the Met’s plush velvet seats in hushed awe.

At a Copeland “Swan Lake” performance, a group of young Black millennials showed up in ballet skirts and high heels. They belonged to a bachelorette party that flew in from Atlanta just to see Copeland dance. Former ABT board member Susan Fales-Hill recalls meeting “a young couple who had flown in from California just to see Copeland dance a lead role.” She said, “The wife was a school principal. She had watched ‘A Ballerina’s Tale’ and was so moved by it her husband decided to surprise her with a trip and tickets.”

At the stage door after Copeland’s performances, the line of fans stretches all the way to Amsterdam Avenue. While she signs their programs, point shoes and what have you, they quickly snap selfies and clutch the presigned Copeland “Swan Lake” photos that manager and publicist Gilda Squire says ABT generously reproduced for them.

New York Times critic Alistair Macaulay recently wrote that Copeland “has become the most renowned person in American dance,” and “her offstage story is much more discussed than her onstage dancing.” But, as Carlotti pointed out, once in the theater it’s all about Copeland the ballerina. In fact, one impact of the “Misty effect” could be that this new, diverse audience is infusing new blood into what some might have feared was becoming an anemic art form.

Whatever the reason, for all the attention, Copeland is not distracted by the glare of the spotlight. Squire explained, “She is able to keep things in perspective because once she goes inside that rehearsal studio, she says, ‘You have to be 100 percent present.’ And, when she steps onstage, all she is is a dancer.”

Although Copeland’s story might get folks attention, what wins them over is her artistry. Make no mistake about it, Copeland is a beautiful ballerina. For that reason, it is important to understand that seeing her once in “Firebird,” “Swan Lake,” “La Fille Mal Gardee” or any other ballet is not a matter of “been there; done that.” As with any dancer, the true appreciation of an artist’s journey is about watching the artist evolve. That, as Dance Theatre of Harlem artistic director and former prima ballerina Virginia Johnson says, “comes with time.”

In fact, DTH founder Arthur Mitchell said on a day clouded by news of police shootings and the Black Lives Matter campaign, “Racism is what’s happening in the world right now.” Then, he seems to echo Times critic Macaulay, who recently declared the fixation with Misty’ s performance of “the most exposed example of virtuoso technique,” the 32 fouettes in “Swan Lake,” to be “a bore.”

Mitchell applauded ABT for the “wide range of roles” Copeland “is being given to dance.” Recalling his own historic promotion, when George Balanchine made him the first Black male principal with the New York City Ballet, at an equally turbulent moment in American history, Mitchell said, “The pressure that is being brought on Misty is not easy.”

Although this season was decidedly special, Mitchell went so far as to raise the barre even higher, noting that there is yet another rung of this remarkable career ladder for her to reach—prima ballerina. “It takes time to get to that point,” he added, leaving unspoken the fact that few do reach that level. Then Mitchell said, “I don’t think this season touched what she can do. It will be interesting to see how she does everything in a year from now.”

Copeland fans, take note. Although you might have been blown away this season, stay tuned because all indications are that the best is yet to come.