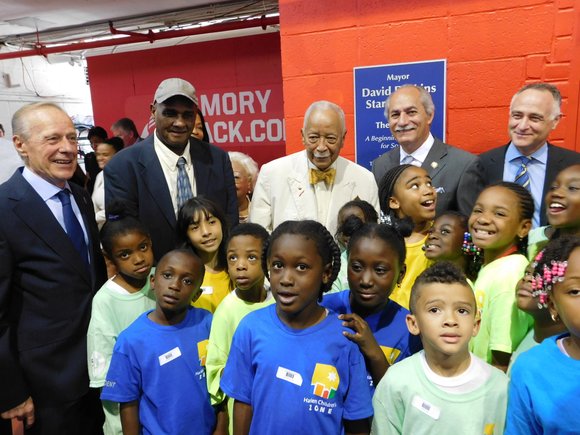 In 1993, then New York City Mayor David Dinkins, the 106th mayor in the history of the city, and the only African-American to ever hold the title, presented a ceremonial key to The Armory in Washington Heights in upper Manhattan to Dr. Norbert Sander, a track and field standout at Fordham Prep High School in the Bronx and subsequently at Fordham University.

Sander, president of The Armory Foundation, thereafter set out on leading a project to reconstruct The Armory into one of the world’s premiere indoor track and field facilities. Almost 25 years later, what shines today inside the brick Classical Revival edifice is the New Balance Track & Field Center at The Armory, indeed a building that by all measures is equal to any indoor facility on any continent utilized primarily for the sport.

Last Thursday, The Armory Foundation deservedly honored Dinkins at a ceremony held at the structure he was instrumental in inspiring by introducing a plaque bearing the inscription, “The Mayor David Dinkins Starting Line.” He was also bestowed a memorial key to The Armory.

“Mayor Dinkins started it all here at The Armory over 20 years ago,” said Sander. “He believed in us and in the children of NYC. We can now say, thanks to him, we have seen over one million youngsters train, compete and prepare for future success right here in Washington Heights. This is a tribute to you, Mr. Mayor, our gratitude from all of NYC.”

“I am pleased and flattered by the attention for simply doing what I was supposed to do,” said Dinkins. “But I am so proud of all the good that The Armory does for thousands of our kids.”

The New Balance Track & Field Center at The Armory is a testament to the foresight and tireless efforts of Sander. Serving as a top venue when Sander competed there as a high school and college student-athlete in the late 1950s and ’60s, it gradually devolved into disrepair, as did the neighborhood where it is located. In the 1980s it was repurposed as a homeless shelter for nearly 2,000 men while still hosting track and field competitions. By 1984, track events were no longer held there.

Sander, a New York City track and field legend who captured the NYC Marathon in 1974, formed The Armory Foundation and sought to reestablish a quality indoor track and field facility in the city. He was ultimately led back to The Armory in Washington Heights and, with the staunch support of Dinkins, surpassed his original intent.

“No physical commemoration could singularly encapsulate Mayor Dinkins’ sweeping legacy and the lasting imprint of his vision for New York City,” said Public Advocate Letitia James. “But for a mayor who completely redesigned the way we think about social and economic progress, the start of this track metaphorically embodies the dynamic, ongoing nature of both his contributions to our city and to where we have yet to reach together.”