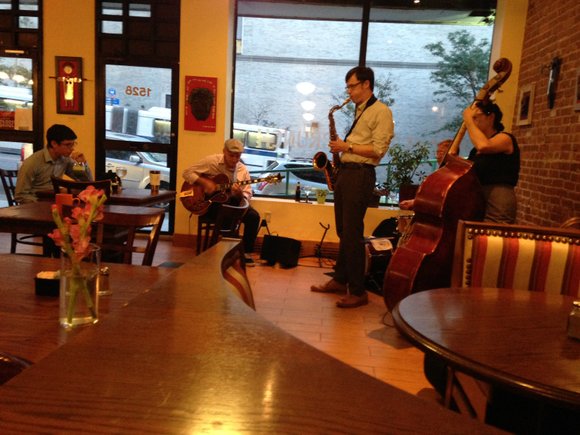 The Chris Johnson Trio, on set at Home Sweet Harlem Renee Minus White/A TIme to Style

Donna Lewis opened Home Sweet Harlem at this location in 2013. The American restaurant’s original location was on West 135th Street, between Seventh and Lenox avenues until 2007. Today, Home Sweet Harlem offers a specialized catering service along with their unique farm-to-table menu of fresh foods.

“When I first moved to Harlem over 20 years ago, I wasn’t satisfied with the menus in most neighborhood restaurants and local food markets,” Lewis recalled. She yearned for crunchy foods. Her grandparents grew up on a farm and they introduced her to good home cooking and lots of fresh vegetables. Lewis loves to cook and often pitches in at the restaurant to help in the kitchen, especially when it’s busy. On weekends, from 9 a.m. to 4 p.m., Home Sweet Harlem serves delicious brunches. They also display art by local artists.

During the performance, Tyler was recording her next show. A native New Yorker, Tyler has dreamed of being on TV ever since she was 11 years old. She was talking about the new book, “Maybe: My Memoirs,” a story of a young Black girl growing up in the Bronx who became a member of The Chantels.

Hayden stopped by to show her new line of sportswear called ENY by Sadia Hayden. Raised in Pontiac, Mich., Hayden now lives in Queens. Her unisex street wear collection is filled with sweat pants and hoodies that are dedicated to bringing awareness to gun violence and helping to end it in American cities. One of her midriff hoodie styles has holes that are trimmed with silver on the bottom to represent many of the victims. There are also crewneck sweaters, jogging pants, long and short pretty print dresses and tunic tops. Her clothes come in sizes small, medium and up to 3X.