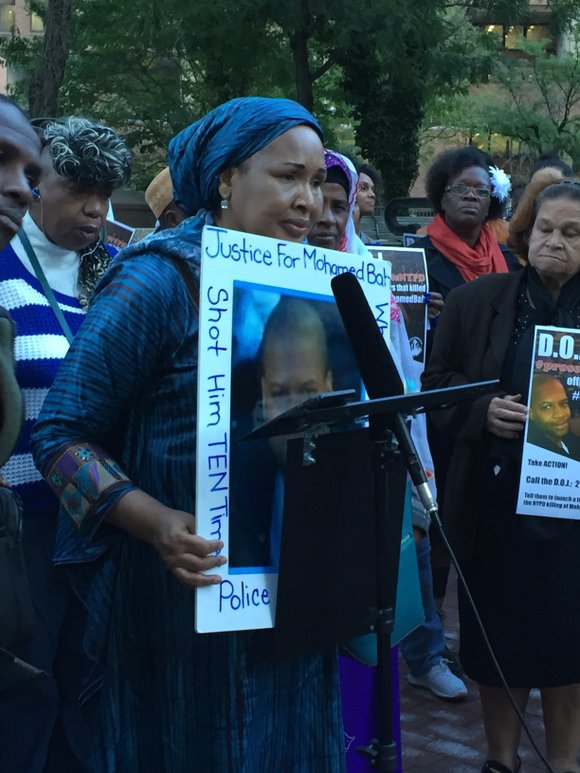 Hawa Bah demands justice for the police killing of her son. Contributed

It has been nearly three years since NYPD officers unlawfully barged into Mohamed Bah’s apartment and fatally shot him after responding to an emergency call for an ambulance.

In September of 2012, when Bah’s mother, Hawa Bah, called 911 to request an ambulance for her emotionally distressed son, she was shocked that the NYPD Emergency Services Unit arrived at the apartment.

It is no surprise to some social justice advocates that a little over a year after the shooting, a Manhattan grand jury failed to indict the officers.

“They botched the case,” said Randy McLaughlin, a civil rights attorney representing the Bah family. “They didn’t look under every rock and under every issue to see whether or not there were real charges. It was a complete failure of a prosecution.”

As Bah waits in limbo for a federal decision, she hopes her son can receive justice.

“The local criminal justice system failed me and my son even though there is clear evidence that they broke the law,” Bah said.”I am demanding the DOJ not continue this failure and instead hold these officers accountable.”

McLaughlin continued, “The only opportunity the family has left is a federal prosecution because there is no other agency that can prosecute these cops.”

Representatives of the Justice Committee, Bah and McLaughlin met with Assistant U.S. Attorney, David Kennedy Thursday, July 21 at the Department of Justice in Lower Manhattan to inquire about the status of the case.

According to Kennedy, the case is being taken “seriously” and is still under review by the DOJ.

“Ms. Bah made it clear, she wants justice for her son,” McLaughlin said. “There was no reason to shoot him.”

Officers forced their way into Bah’s home without a warrant. Lt., Michael Licitra commanded cops to forcefully enter the home. Licitra violated NYPD protocol, which requires authorization from the duty captain before taking action against an emotionally disturbed person.

“They shot my son eight times,” Bah said in a statement to the AmNews.”Firing the final shot as he lay helpless on the ground. Then they tried to cover up their crimes by releasing false statements about the incident and claiming they lost “evidence.”

According to court documents, the NYPD intentionally placed a kitchen knife and NYPD T-shirt at the scene to defend claims that Bah attempted to stab the officers.

“No DNA was ever used to test that knife,” McLaughlin said. “No fingerprints were used to see if he actually touched it.The knife was placed under a [flood prone area] that was [damaged] by hurricane Sandy. No one can go in and get that knife and examine it.”

McLaughlin explained that the alleged knife is a “myth” and officers could not identify the weapon in photos.

Several cases over the past three years have shown that cops are not prosecuted when they commit a crime against a civilian.

“It creates an environment where they will never be held accountable,” McLaughlin said. “No one loses their freedom when someone loses their life. At the very least if you kill someone there should be consequences for that.”