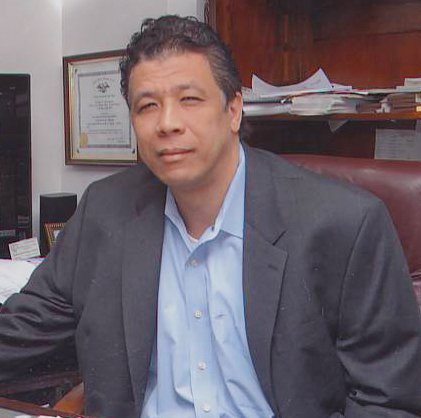 Growing up on the Caribbean island of Trinidad has its perks.

A mile or less walk to the beach, picking mangos and playing soccer or a game of chess with friends were the joys of Brooklyn attorney Brian Figeroux’s childhood.

“I did not have to worry about how I was going to be treated in society,” Figeroux said. “When you land in America, there is an issue of race.”

In the 1980s, Figeroux moved to New York and later started the law firm, Brian and Associates, which concentrates on criminal defense, family and defense law, police misconduct issues and U.S. immigration law.

Dressed in a crisp, blue long-sleeved shirt, Figeroux drinks coffee to keep him charged for the day. Week after week, he offers free, confidential legal consultations to clients who face civil issues.

The left-wing attorney is an alumnus of Brooklyn College Law School.

He met President Barack Obama in 2007 at the Brooklyn Marriott Hotel.

“He brought tears to my eyes,” Figeroux said. “President Obama is not a Black leader. He is a leader of America.”

“Not only do you have to understand and give people answers, you have to get the questions for them because people do not ask the right [legal] questions,” Figeroux said.

As gentrification takes over Figeroux’s Bushwick community, he hopes residents understand the impact of housing segregation.

“Where does a white Republican and white Democrat go at the end of the day?” Figeroux asked. “They go back to their white neighborhoods. The manner in which they see our struggle, if they see it at all is an abstract, not emotional or real one.”

“The change in our community will come from us,” Figeroux said. “One of the issues that we have is we lack love for each other, simple love. When you love somebody, what do you do? You do what is in their best interest.”

For years, the businesses in Bushwick were Black-owned and operated, now an arrival of wealthier residents has caused these establishments to be displaced.

“If you start a business today, who would you hire?” Figeroux asked.

“Your friends and family,” he answered.

He continued, “Former administrations killed our dreams and did not give us access to [business] contracts.”

Figeroux is the founder of the New American Chamber of Commerce, a nonprofit group that facilitates the success of minority businesses. He also serves as the publisher of the Immigrant’s Journal Legal & Educational Fund and Caribbean American Weekly.

Twenty years ago, the young Caribbean-American attorney acquired fame for the multi-million dollar civil case of Abner Louima, a Haitian immigrant who was sodomized with a broomstick in a Brooklyn police station.

“I would like to be a part of bringing about change in America and that case gave me the opportunity to do so,” Figeroux said. “The biggest lesson I learned is that people will talk about civil rights, but all they want is the money.”

Figeroux is a community leader who has supported more than 10,000 families across New York.