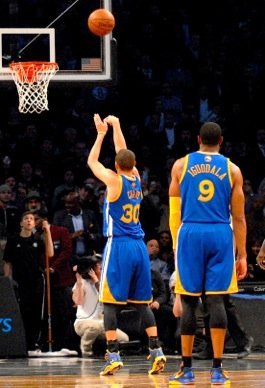 They played two Game 7s, two all or nothing, loser-go-home elimination games to get them here—to the 2015-16 NBA Finals.

The Golden State Warriors withstood Oklahoma’s length, their athleticism, their defense and their ability to score. They withstood Kevin Durant and Russell Westbrook, globally acknowledged as basketball greats. They withstood a 3-1 deficit, and overcame the Oklahoma Thunder’s leads to bounce back, to win the Western Conference Finals in seven games.

“We got blown out in two straight games,” said the Golden State’s head coach, Steve Kerr. “We couldn’t find a consistent rotation off of our bench.”

Kerr made the adjustments, worked it out. Their Game 6 road victory Saturday night in Oklahoma restored fan confidence and gave them some street cred. It enhanced the myth, their legend, and solidified their respectability. Klay Thompson’s 41 marksman-like points, 10 more than Stephen Curry, Golden State’s backcourt, helped.

“We know who we are,” stated Kerr. “It was just a matter of getting back to our identity.”

Golden State’s Game 7 home win jacked a victory from an aberrant OKC team that led at the half, winning each quarter except the third, where they were outscored, blown out 29-12. Words written here would have been about OKC, heralding them, if it weren’t for Golden State’s overall resiliency. Instead, the only thing now worth mentioning is how OKC will spend the summer questioning themselves and wondering what happened.

What happened? OKC is the first team up three games to one to lose a conference series since 1981. That’s what happened. Golden State now plays the Cleveland Cavaliers in the Finals, beginning tonight, Thursday. A rematch of last season’s championship series, which lasted six games. This time, Golden State are the defending champs.

“I’m looking forward to four more wins,” said Curry, the league’s MVP, winning the honor two years in a row. On his own, he contributed 36 of the Warrior’s 96 points Monday night.

Golden State and Cleveland, both number one conference seeds, faced each other twice since last year’s playoffs. Golden State swept the two, beating the Cavs on Christmas Day at home, 89-83, and again on Jan.18, a 132-98 blowout win on Cleveland’s court, two games that added to the warriors record-setting 73-win season. The latter game initiated the mid-season firing of Cleveland’s second-year coach, David Blatt.

On his return to Quicken Loans arena where the Cavaliers play, and where the Warriors won their 2014-15 chip, Curry wondered out loud if the visitor’s locker room still smelled like champagne. “The last time I was there, we had a trophy, we had champagne,” he said, recalling last season’s championship victory. “We had a good time.”

He scored 35 points in three quarters on the Cavaliers’ floor during that January game, just as if he were at home.