A word with some Tony nominees 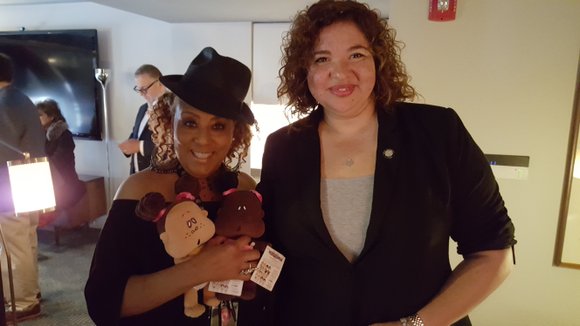 Don’t shoot the messenger. It appears that “the Great White Way” still is a long way from authentic inclusion, despite the slew of nominations and earning the hashtag #TonysNotSoWhite.

According to a recent article, written by Lee Seymour for Forbes, in comparing the Tonys (1947) and the Oscars (1929) on the issue of racial diversity, the facts are sobering. “Both the Tonys and the Oscars recognize white artists by an overwhelming majority,” Seymour wrote. “Whites make up 95.3 percent of all Tony nominees and 96.4 percent of all Oscar nominees, a difference of only 1.1 percent between them.”

There is still much to celebrate with nominations for the teams of “Shuffle Along, Or the Making of the Musical Sensation of 1921 and All That Followed,” “The Color Purple,” “Eclipsed,” “Hamilton” and more.

At the meet-the-nominee brunch, Renee Elise Goldsberry, who earned a Best Performance by an Actress in a Musical for her role in “Hamilton,” was most proud on the impact the groundbreaking musical is having on the youth of the city.

“‘Hamilton’ reflects a huge part of our culture, our story, our people,” stated Goldsberry. “Our people connect to the truth and they understand. It’s exciting to watch the youth, who come to our weekly educational initiative, express themselves. On our stage, they perform their own raps, write their own songs. It’s about empowering young people to share their own stories.“

Daveed Diggs, nominated for Best Performance by an Actor in a Musical for playing two roles—Marquis de Lafayette and Thomas Jefferson—in “Hamilton” relishes the challenge and makes it clear that the two “are completely different characters” and in the play they get completely different reactions from the audience.

“Lafayette has no problem breaking the fourth wall,” confessed Diggs. “I come out blowing kisses and waving to the audience. While playing Jefferson that does not happen. He is aware of everything and is just waiting for a moment to connect.”

Nominated for Best Book of a Musical, George C. Wolfe is bringing the power with “Shuffle Along, Or the Making of the Musical Sensation of 1921 and All That Followed,” which earned a total of 10 nominations.

One of the bright minds in the room, nominee Brandon Victor Dixon, highlighted the fact that the original musical, “Shuffle Along,” which debuted in 1921, was groundbreaking in many ways and helped shape modern Broadway. “Shuffle Along” was the first musical written by, starring and produced by African-Americans, and it changed the dynamic not only economically but also in terms of how Broadway shows are created.

“It was the first musical with a jazz score among other firsts,” said Dixon. “That includes launching the careers of Josephine Baker, Paul Robeson and Florence Mills, who became the biggest entertainment star—white or Black—at the time. There are many milestones that ‘Shuffle Along’ created that no one really knows anything about, yet.”

According to “Eclipsed” producers Stephen C. Byrd and Alia Jones-Harvey, the only lead African-American producers on Broadway, the six-time nominated play is making history again with the nomination for South African-born director Liesl Tommy.

“Liesl Tommy is the first woman of color to be nominated in the category of best direction for a play,” said Byrd. “There has only been three female Broadway directors—ever—and our company has debuted two of them: Debbie Allen with ‘Cat on a Hot Tin Roof’ and now Tony nominee Liesl Tommy.”

Exposing the creative process, director Liesl Tommy is regarded as a bright focal point for creatives exploring storytelling on the stage.

“I am definitely a person who gets down on her knees and expresses gratitude,”she said. “Growing up in South Africa, during apartheid it was inconceivable that something like this could happen, in your family, in our lifetime.

“My father reminded me about the passion, focus and dedicated needed to achieve goals. I knew from the age of 10 that this is what I wanted to do with my life and I never, ever wavered. It took focus and sacrifice, but if you really believe in storytelling and if you really believe in touching people, and changing them, you will never stop. I truly believe that theater is a force for good and for change in this world.”