Mathematician Dorothy Vaughan, a pioneer in the Space Age 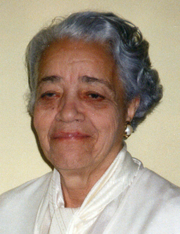 As the world of computer literacy and development sped up, Vaughan kept pace, so much so that she became an expert FORTRAN programmer. She also made notable contributions to the Scout Launch Vehicle Program.

Vaughan retired in 1971, having never received nor sought another management position at Langley. Along with Johnson, Vaughan supervised and mentored a number of outstanding mathematicians, including Jackson, Eunice Smith and Kathryn Peddrew. Even the current contributions by Christine Darden and the fact that NASA is headed by Charles Bolden, a post he has held since 2009, are the results of Vaughan’s pioneering work.

When the film “Hidden Figures” is released—it is slated to arrive in January 2017—it should give Vaughan the prominence that was practically obscured during her lifetime. In the film, Vaughan is portrayed by Octavia Spencer, Johnson is portrayed by Taraji P. Henson and vocalist Janelle Monae is Jackson. According to NASA and thecomputerhistory.com, Johnson is still alive at 97 and lives in Hampton, Va. Jackson died Feb. 11, 2005.

The film will also give author Margot Lee Shetterly additional and worthy exposure. She grew up knowing Johnson in Hampton, and from her father she learned of Johnson’s life and career. “I thought, oh my God,” Shetterly told a New York Times reporter. She recounted how she had exclaimed to her father, “What is this we’re hearing here?”

Shetterly’s book, also entitled “Hidden Figures,” is slated for publication next year, and it will be good timing if the film premieres at the same time.

“For me, growing up in Hampton, Virginia,” Shetterley said, “the face of science was brown like mine. My dad was a NASA lifer, a career Langley Research Center scientist who became an internationally respected climate expert. Five of my father’s seven siblings were engineers or technologists. My father’s best friend was an aeronautical engineer. Our next-door neighbor was a physics professor. There were mathematicians at our church, sonic boom experts in my mother’s sorority and electrical engineers in my parents’ college alumni associations. There were also Black English professors, like my mother, as well as Black doctors and dentists, Black mechanics, janitors and contractors, Black shoe repair owners, wedding planners, real estate agents and undertakers, the occasional Black lawyer and a handful of Black Mary Kay salespeople. As a child, however, I knew so many African-Americans working in science, math and engineering that I thought that’s just what Black folks did.”

We can hope that the film will expound much more than this article on the lives of the Black women who were on the cutting edge of the Space Age, making indispensable contributions at NASA.

Perhaps after the film debuts we can revisit NASA and discuss the lives of a few other African-American women who worked under Vaughan or who went on to make their mark in other divisions of the space program.