The Warriors and Cavs have been here before 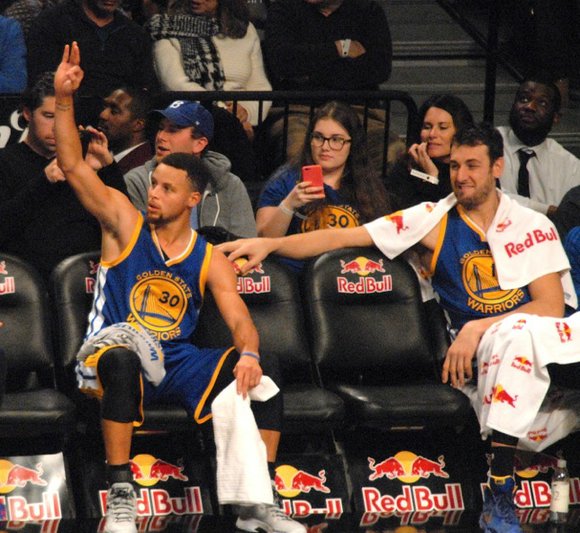 Both the Golden State Warriors and the Cleveland Cavaliers have been here before. Together, last year, Game 6 of the NBA Finals in Cleveland, the Quicken Loans Arena where the Dubs, the shortened abbreviation for the “W” in Warriors, celebrated winning their championship on the Cavaliers’ floor. Popping bottles. Sipping Cris. Soaking up the Cavs’ guest locker room with the finest of top shelf champagne.

Though they shared some of that moment, the Cavaliers sipped none of that champagne. Golden State looks to keep them from doing so again tonight, Thursday, in another Game 6, where they can, again, clinch the NBA’s coveted championship.

The Warriors will have the heart and soul of their team with them this evening. Draymond Green returns after a one-game suspension, caused by opponent LeBron James and adjudicated by NBA executives Sunday, two days after Friday’s game, Game 4, instead of letting the call stand that was initially made on the floor.

At most, Green and James should have each been assessed a post game technical foul, but Green was issued a Flagrant 1, a more severe penalty, putting him over the limit, which sat him down for one game, Game 5, a Warriors’ home game in Oakland Monday.

The 6-foot-7 Green, 26, weighing 230 pounds, is in his fourth year. This season, he ranked second league wide in triple doubles. He’s first in rebounding, blocks and assists on this Warriors team and third in scoring. Defensively, he’s a disruptor. He makes it difficult for an opponent who challenges him., especially in the paint.

“We missed him tonight, big time,” said Warriors’ guard Klay Thompson after Monday night’s loss. “Draymond does a little bit of everything.”

“We knew we were without Draymond, so there’s no point in harping on that,” said Warriors’ head coach, Steve Kerr. “We had to play better, and we didn’t.”

Besides retroactive technical and flagrant calls, the league’s coaches should make a complaint about the NBA policy of head coaches having to conduct interviews for television during important games.

Down nine points at the start of the third quarter, 93-84, Kerr should’ve been solely focused on overcoming his deficit, on a victory, not on making brief cameo TV appearances.

And what about missed and errant calls, such as the one made on Thompson by the Cavs’ Kristin Thompson at the start of the first quarter of Monday night’s game? Or, the errant out-of-bounds call on Irving, relinquishing the ball to Golden State within the seven minute mark of the third quarter.

Also, there have always been mentions of so-called star players like James getting preferential calls or treatment because of their status in the league. This favoritism is wrong and should never occur. There should be one set of rules applied for all players. From the league’s most valuable to the last man on the bench. That diminishes some of the improprieties that may exist. James has had a habit of looking for calls, a sense of entitlement, even expecting imaginary ones.

His Cavs will be the first to overcome a 3-1 deficit to win an NBA title if they can win their next two. They’re down to their last chances to prevent Golden State from repeating, from bottle popping. The first is one tonight. If they succeed, they’ll have one final opportunity on Sunday, a Game 7 on Father’s Day in the Golden State. But if history repeats itself, we’ll all have to find something else to do.