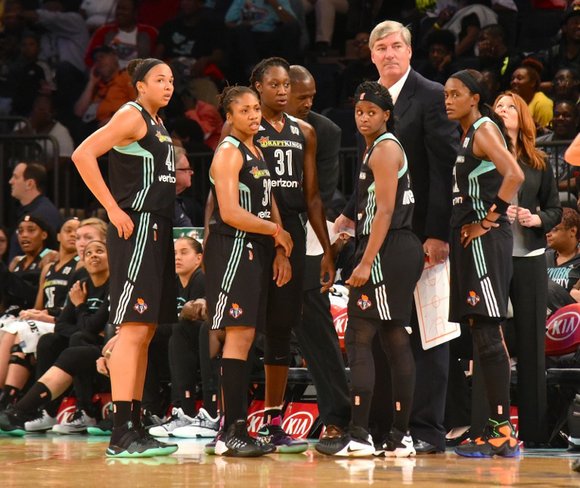 After the New York Liberty’s home court victory over the Dallas Wings last week, the team hit the road and continued to win. First, they dispatched the Connecticut Sun 80‑72. Then they beat the Indiana Fever 78‑75 in overtime, the Liberty’s first win in Indiana since 2013.

In the Connecticut game, Liberty forward Swin Cash passed the 5,000-point mark in her WNBA career. Earlier this month, Cash, 36, announced her retirement after this season. Tina Charles continues to be a dominant force, scoring a career-high 32 points in the Connecticut game and 26 points in the Indiana win. Liberty center Kiah Stokes made a career-high 14 rebounds against Indiana.

After a midday game in Atlanta yesterday, the Liberty headed home for what will be a weekend of celebrations. Friday night will be Pride Night as the Liberty take on the Chicago Sky. The first 5,000 fans will get #Orlando United wristbands.

Sunday, the Liberty take on the Phoenix Mercury. There will be festivities to mark the team’s and the WNBA’s 20th season, with members of the 1997 Liberty in attendance, including Vickie Johnson, Sophia Witherspoon and Simone Edwards.

“It was magical,” recalled Witherspoon, a teacher and basketball coach in Florida. “To be a part of history was amazing. … We remember and value those times we had as teammates.”

“A lot of old fans are coming back just to celebrate the 1997 team,” said Johnson, now an assistant coach with the San Antonio Stars. “What I really want to bring is us coming together as one and celebrating the joy, excitement and fun that we had playing our early years in New York. Let the fans know we appreciated their support.”

That inaugural season marked a time in which veteran pros such as Teresa Weatherspoon, Sue Wicks and Kym Hampton, who had been playing overseas, finally got to show off their moves in the U.S. They mentored young players such as Johnson and Edwards.

“Just coming out of college and being a part of that—for me it was the most amazing thing,” said Edwards, who was a developmental player in 1997 and is currently a coach and trainer. “Every day, I was going up against these players in practice—Kym Hampton, Rebecca Lobo—getting better and better. They were so nice. They inspired me to be that kind of player.”