A celebration of Muhammad Ali 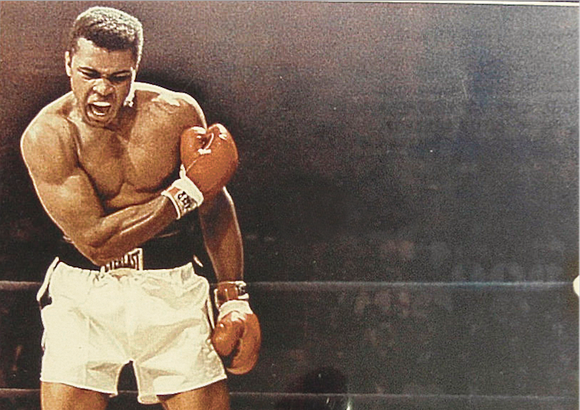 It’s taken me a few weeks to process the passing of Muhammad Ali—sports icon, fighter for civil rights, humanitarian and an unapologetic Black man. I have gotten into so many debates with friends these past few weeks about the role of our modern day sports figures, many of whom seem to be more interested in selling sneakers than using their platforms to speak about the pressing issues facing Black communities across the country (I’m looking specifically at you, Michael Jordan).

As I am sure many of us did when Ali passed, I went back and looked at video of some of his most famous interviews, combed through his infamous quotes and reflected on a man willing to sacrifice the prime years of his athletic reign to protest a war he felt had no moral justification. Much of this processing happened while I was gearing up for the rematch between Steph Curry and LeBron James in the NBA. Both men have spots on the U.S. Olympic team, both have million dollar contracts selling everything from shoes to soda and both are at the height of their careers in many ways. Yet, as police officers in Baltimore are acquitted and police officers in New York City aren’t even indicted, I wondered what has become of our modern day sports heroes—those who could probably change public opinion and policy with a simple tweet, let alone a major press conference as a collective.

I keep looking at the photo of Ali flanked by Kareem Abdul-Jabbar, Jim Brown, Bill Russell and so many others who have changed the way America thinks of sports, religion, Blackness and U.S. foreign relations. One major omission from that photo is O.J. Simpson, a man who we know was in no way concerned about his Blackness or about those in the Black community writ large. I am not singling him out, merely pointing out what has now become fact. O.J. Simpson did not want to be known as a Black player; he just wanted to be O.J. Similarly, fast forwarding some years, Michael Jordan famously proclaimed that Republicans bought sneakers, too—hence his unwillingness to take sides in particular debates that disproportionately affected Black Americans.

So this question is raised: What is the point of amassing and securing millions of dollars only to then demure when it comes to the pertinent questions of the day? I can’t tell anyone what to do when it comes to their pocketbooks or their families, but after James signed the largest Nike contract in history, there seemed no better time to speak out … beyond wearing an “I Can’t Breathe” T-shirt. As the past two years have shown us, Black folks are struggling in this country when it comes to interactions with the police state, the carceral state and the justice system.

It is my hope for the upcoming months and years that our sports icons will look to their mentors who have paved the way, not only in their respective sport but also in our collective consciousness. More money and power do not always mean more problems. They can actually be used to alleviate some of the problems we face as a community.

Christina Greer, Ph.D., is an Associate professor at Fordham University and the author of “Black Ethnics: Race, Immigration, and the Pursuit of the American Dream.” You can find her on Twitter @Dr_CMGreer.