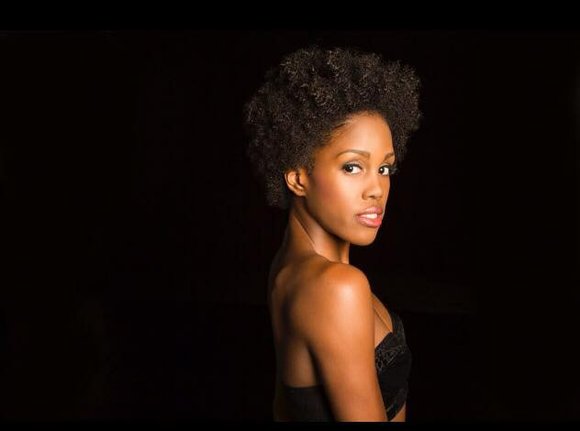 A recent Intel commercial opens with the shadowy image of a Black female dancer in midair, like a cannonball caught in midflight, her Afroed silhouette illuminated by an electric blue backdrop. Her body is scooped into a C-shape, head bent forward, legs curled under, arms flung high behind her. A perky voice announces, “My name is Paige Fraser. I started dancing when I was 4-years-old, and from then on I knew that dance was something that I loved to do.” Then, confiding that when she was 12, she was told she had scoliosis, a curvature in your spine, her voice quivers as she fights back tears, adding, “I just remember that terrified me because … dance was something I had to do.”

Fraser’s story is highlighted in the technology giant’s commercial that aired during the Super Bowl and the Grammys because it is about a triumph of will reminiscent of Misty Copeland’s famous Under Armour commercial, “I Will What I Want.”

Even before this Bronx native took her first ballet classes at 5-years-old with a School of American Ballet-trained teacher, dance was at the main focus of Fraser’s hopes and dreams. Her love of dance deepened, thanks to summer intensives at American Ballet Theater and Dance Theater of Harlem and acceptance into the Professional Performing Arts School and Ailey School, where she was introduced to modern, jazz and more. But, along the way, she was blindsided by a diagnosis of a potentially debilitating condition and her dreams were threatened.

Her mother, Alexia Fraser, recalled in a recent Amsterdam News interview what it was like when she first learned her daughter had scoliosis. “Paige was 12-years-old,” she said. “It was during an annual physical for school. The doctor looked at her back and noticed that something wasn’t right. He sent her to get x-rays and see a specialist. I’m from Jamaica and we never imagined she had scoliosis.” Immediately, the doctor recommended surgery, but Fraser and her parents sought a second opinion and found the New York chiropractor Fraser credits with helping to make it possible for her to pursue her passion and become a dancer. “He helped me keep my spine in a stable place,” Fraser said. She also credits a high school teacher who had the same condition with helping her retrain her body and “find a center of alignment.” In addition to dance, her mother credits the strength-training technique known as Pilates as well as her discipline and determination.

Today, on the Alvin Ailey American Dance Theater website, Fraser’s picture is accompanied by a caption that lists highlights of her dance experience, which includes Beyonce’s 2013 tour, the Deeply Rooted Dance Theater, Ruth Page Civic Ballet, Nicole Miller’s Fashion Night Out and, currently, Visceral Dance Chicago. She has also graduated cum laude from the BFA program at Fordham University in 2012 after joining the Alvin Ailey Repertory Company, better known as Ailey II, in her senior year at Fordham and performing with that illustrious company for two years. Along the way she has also worked with an impressive list of talented choreographers, including Troy Powell, Sidra Bell, Robin Williams, Monica Cervantes and Nick Puppillo, Visceral’s artistic director.

Fraser is also spreading her wings into other dance-related areas. This summer, while the innovative, groundbreaking Visceral dance company is on break, Fraser is teaching aspiring dancers at the Houston Academy of Dance in Texas, thanks to recommendations from her mentors Ailey II Artistic Director Emerita Sylvia Waters and Artistic Director Troy Powell.

“I teach intermediate and advanced and little, little babies,” Fraser said. “I’ve done it now for two summers. It’s been really fun teaching them all different styles—Horton, improvisation, ballet and pointe. I’ve also choreographed on some of the older girls for their competitions. It’s great experience that has allowed me to broaden my horizons and it’s been really fun.”

In addition, Fraser is embracing the fact that her determination to pursue dance, despite a challenge that could have stacked the deck against her, has inspired others facing similar hurtles. Recently, she posted the Intel commercial on her Facebook page, announcing, “June is Scoliosis Awareness Month and I had the pleasure of working on this beautiful series ‘It’s in the Way She Moves.’” She also shared clips of television news stories, telling her inspiring story on a Chicago ABC affiliate and News 12 The Bronx. As Fraser continues to pursue her passion, her story continues to unfold.