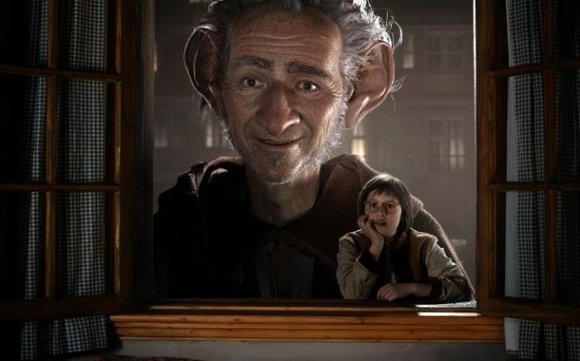 It’s only the mind of someone great (i.e., Spielberg) that makes this adaption possible, for all ages to wrap their heads around one of the unlikeliest friendships in cinema history.

The sophisticated all-digital makeover of Oscar winner Mark Rylance, which transforms him into the non-flesh-eating, big-hearted giant BFG, has made this film a new family classic.

Imagine for a moment that cannibal giants do exist and they roam the streets of modern London, and in the dead of night, they pluck kids from their homes for a quick midnight snack.

Keep your imagination engaged because there is one lone giant, BFG, who is truly an enlighten soul. Naturally, he is very freakishly tall with gigantic hands, but he hides in plain sight, using the most imaginative moves to evade detection, and he has huge elephant-scale ears and a nose that would be right at home on Mount Rushmore. His unique way of talking is both touching and humorous, calling the television “the tellytelly bunkum box” and the radio, a “squeaker.” But most important of all, BFG is strictly “vegan,” and because of that choice he is horribly bullied.

When 10-year-old Sophie (newcomer Ruby Barnhill) spies BFG from her window, confirming the existence of giants, he whisks her from the orphanage and takes her into the dangerous land of Giant Country, which is home to the nine children-eating giants with names such as Fleshlumpeater, Bonecruncher and Meatdripper, and with teeth the size of tombstones—and they are twice BFG’s size.

BFG’s vegan diet is the source of comedy as he snarfs down a stinky vegetable called Snozzcumber, which is hated by the giant leader, Fleshlumpeater (Jemaine Clement), who craves only human treats. Just the mere scent of a child sends the nine giants into a “seek, find and devour” mode.

Little spunky Sophie isn’t intimidated. In fact, she’s curious and her plucky courage is so infectious that it prompts BFG to summon his own buried reserve.

At Sophie’s insistence, BFG takes her along on a dream-gathering expedition, hopping through a lush magical pool to Dream Country, an upside-down world where “phizzwizards”—literally, the stuff that dreams are made of—circle the branches of a giant tree. Together they chase and catch these “dreams and nightmares” that move about like excited butterflies.

In constant danger of being found inside Giant Country, the pair realize that a permanent solution must be created and quickly. The universal themes of evading bullies and the richly detailed worlds of the misunderstood other, much like “E.T.,” will help push parents to introduce their younger children into the cinema.

There are many elements that make this film excellent, including the wonderful performance of Rylance as BFG, who succeeds in imbuing life into his digital avatar with subtlety and nuance.

The humor is rich and much is sourced directly from Dahl’s novel, creating the giant’s “squiggly” way of speaking in a dialect known as “gobblefunk.”

A nod to Melissa Mathison’s excellent screenplay should be highlighted because it brings a deepening connection between Sophie and BFG and tones down many of Dahl’s more outrageous gags that are in the book, leaving them to the viewers’ imagination.

What Mathison does best is help us understand what is familiar in BFG’s character, and one of the best demonstrations of his great big heart is how he attempts to compensate for the other giants’ human-gobbling antics by blowing pleasant dreams through the windows of sleeping children.

If you are familiar with Dahl’s book then you understand how vital dreams are in resolving the story’s giant-human connection. It’s inside BFG’s dream-mixing workshop where Sophie finds a creative solution to an almost implausible problem—which brings them both face-to-face with the Queen of England—applying magical logic, begging the question “Who else could help make nine naughty children-gobbling giants go away forever if not the Queen?” And it’s the loving heart of BFG that seals the deal.