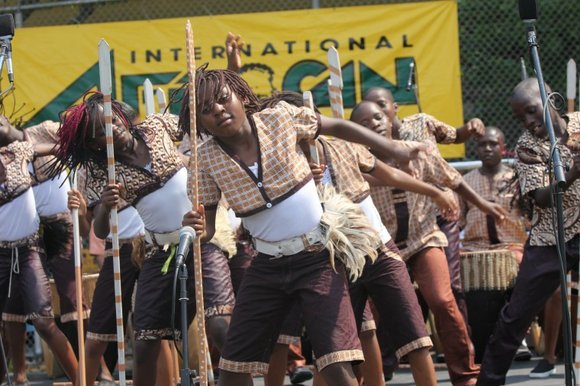 This year marks the 45th anniversary of Brooklyn’s most beloved celebration of African culture and family. A family friendly event, the IAAFestival will return to Commodore Barry Park, Friday, July 1 to Monday, July 4, 2016. Rain or shine, the festival will be held from 10 a.m. to 9 p.m. each day. The park is located on Navy Street between Park and Flushing avenues in the Fort Greene neighborhood of Brooklyn. The theme this year is “Sisabalandele,” which in the Zulu language means “We Are Still Following Them” (the ancestors). For more information, visit the website at www.IAAFestival.org or call 718-638-6700.

Highlights include a tribute to Prince, Maurice White and Aretha Franklin, the 27th annual Symposium, a daily children’s program, a talent search, an arts and craft zone, a chess tournament, the annual natural hair show, a fashion show, a health fair, a poetry and spoken word show, an Akom ceremony, martial arts exhibitions and dance workshops, appropriate for people of all ages, backgrounds and musical preferences.

The admission is $5 for adults and $2 for children (suggested minimum donation). For general information, call 718-638-6700 or email info@iaafestival.org.

The IAAFestival began in 1971 as a fundraiser for the Uhuru Sasa School, a community-based initiative that educated youth and adults about African culture. The fundraiser was a small festival with approximately 20 arts and crafts vendors, local entertainers and food prepared by parents of the students who attended Uhuru Sasa School. Almost 2,000 people came to the event and the fundraiser was a major success. That early format of integrating entertainment, food and marketplace drew increasing crowds annually, and the event became known as the African Street Carnival. Four years later, the carnival was moved to the field at Boys and Girls High School in Bedford-Stuyvesant, Brooklyn. There, the event became the African Street Festival.

Today, the event is known as the International African Arts Festival and has an estimated annual audience of 75,000. Although still held in Brooklyn, the IAAFestival is now in its third transition to a larger venue. The original approach of showcasing local folk arts and entertainment has remained, yet has simultaneously grown to include artists such as The Mighty Sparrow, Fela Kuti, Living Colour, KRS-1, Doug E. Fresh, Third World, Erykah Badu, India Arie, Lauryn Hill and many other nationally and internationally revered artists.