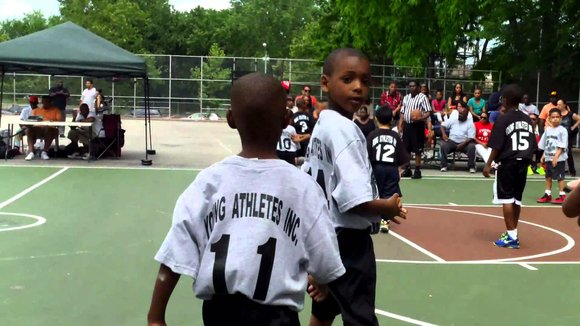 Dotted across this country’s urban landscape, summer youth basketball has long been a staple of the social fabric of countless communities. In the tradition of the Negro Leagues, the multitude of tournaments held in unshaded playgrounds galvanize collective neighborhoods, where elders sit in lawn chairs sharing gossip and orally passing down the history of Black folks in America to those decades younger. Children run through sprinklers barefoot while the smell of barbecue permeates the thick, humid air as the rhythmic sound of basketballs pounding pavement converge with the blaring vocals of Kanye West, Drake, Rihanna, Wiz Khalifa, et al.

As the optics and audio of summer youth basketball have evolved, the essence of its purpose has remained by and large true to the mission of the great Holcombe Rucker. As a young playground director for the New York City Department of Parks and Recreation in the late 1940s through the 1960s, Rucker became the framer of organized outdoor youth basketball, a sporting genre that nearly 70 years later is a global fixture on every continent, with the exception of Antarctica.

Rucker’s mission was to steer young men down a path of productivity through education and social consciousness, by extension helping to build communities. He never held an ulterior motive, according to basketball historian and this publication’s sports editor, Howie Evans, a close friend of Rucker. “The man was completely dedicated to uplifting young people,” Evans stated to this writer.

The societal challenges, while certainly arduous, that noted New York City basketball luminaries such as Ernesto “Ernie Morris” and Bob McCullough faced as kids under Rucker’s guidance aren’t as unforgiving as the obstacles confronting youth today, particularly gun violence, which should be viewed as a national health crisis.

Night after night, news reports grimly inform the masses of another shooting of a youth by a youth, often resulting in death, shattering the lives of the victim, perpetrator and their loved ones. An unacceptable number of these acts occur in or around playgrounds at which summer tournaments are held, like the quadruple shooting last June at a basketball tournament in Hartford, Conn.

Summer youth tournaments were once a safe haven from violence, a place where the African proverb “It takes a village to raise a child” was embodied. Teachers, bus drivers, police officers, doctors, lawyers and politicians, all of whom were raised together but were separated by life’s journeys, would come together on random weekends to watch their children, grandchildren, nieces and nephews compete in the Rucker tournament, Each One Teach One and Citywide, reminiscing, reconnecting and providing pathways for youth to grow as scholars and athletes.

The confluence of corporate sponsorships, most notably major apparel companies, the proliferation and corruption of AAU basketball and opportunists hunting financial gain masquerading as mentors and caretakers has infected summer youth basketball and blurred the lines of purity and profit.

Yet the spirit of Rucker can still be felt at places such as the Kyrie Irving-Rod Strickland Summer Basketball League in the Bronx, under the umbrella of Young Athletes Inc., and seen in men such as its director, Lamarre Dyson, who in the mold of Rucker has had a hand in helping dozens of young men and women gain college scholarships, in addition to forging careers in the NBA and pro leagues overseas.

There are many more summer tournaments in Philadelphia, Washington, D.C., Chicago, Los Angeles and much smaller locales that have men and women giving their time unconditionally to serve youth. In urban communities, summer tournaments have long-standing significance. For all involved, the roots of summer youth basketball must be revisited.