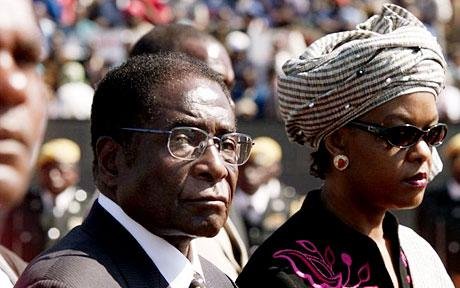 As news spread, a number of the foreign companies abandoned their equipment. Anjin Investments Ltd., the Diamond Mining Co., Jinan Mining Ltd., Kusena Diamonds, Marange Resources Ltd. and Mbada Diamonds were the first to give in to the threat. They had been invited to nationalize their assets, but instead they chose to remain private entities and surrender whatever little political capital they had built up.

“Since they no longer hold any mining titles, these companies were notified this morning to cease all mining with immediate effect,” Zimbabwe Mines Minister Walter Chidakwa explained last Monday.

According to the fourth annual report on the global diamond industry prepared by the Antwerp World Diamond Centre and Bain & Co., Zimbabwe ranked ninth in total diamond output in the world with 4.7 million carats in 2014. Last year, Zimbabwe’s production fell by 1.6 million carats, and the government received $23 million in royalties and other fees from diamond mines, down from $84 million in 2014.

This is another effort in tune with Zimbabwe’s land reform program, which was initiated in 1980, in which European imperialists and Caucasian Zimbabwean land thieves were forced to surrender their land. It was then redistributed to its rightful owners, the nation’s indigenous inhabitants. Approximately 11 million hectares of land have been acquired since 2010, with an additional 3.5 million having been accumulated the previous three decades. By 2013, every farm in Zimbabwe previously owned by Caucasians had already been redistributed or prepared for redistribution.

By nationalizing Zimbabwe’s diamond industry, Mugabe is ensuring that one of his country’s primary resources is no longer being exploited by foreign imperialists but instead helping his country be self-sufficient.