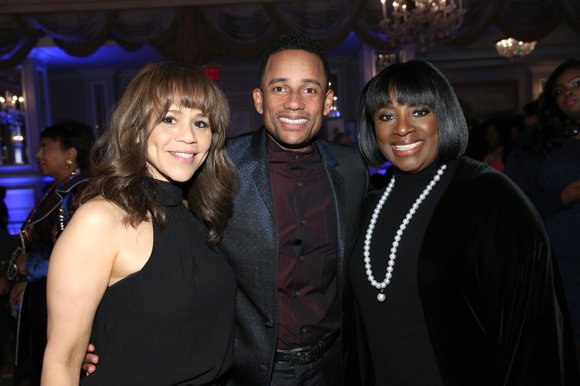 More than 275 guests celebrated the achievements of five local high school scholars who overcame adversities ranging from homelessness and bullying to poverty and physical and verbal abuse at the Children’s Defense Fund-New York annual “Beat the Odds Gala” at the Pierre in New York City. The event, hosted by television personality Star Jones, also honored renowned stage and screen actors LaTanya Richardson Jackson and Samuel L. Jackson, and business leader Roger W. Ferguson Jr., president and CEO of TIAA-CREF, for their longstanding commitment to CDF’s Leave No Child Behind mission.

The scholar shared inspiring stories about personal challenges they faced along their paths to success. Speaking of the challenges of homelessness, Aesron Jeremiah noted, “There are more than 84,000 homeless students in New York City. It’s tough for us to continue following our dreams in our situation. That’s why supportive programs are important. Without them, I wouldn’t be standing here tonight.”

Elham Chowdhury shared, “As a Bengali Muslim male growing up in America, it has not been easy because every day I have to face the challenges of the intertwinement of race and religion with socioeconomic status. But I wake up every day and emphasize the importance of maintaining a positive and resolute disposition. It’s vital to have support and a drive so your dreams can one day come into reality.”

Speaking on the challenges of being an undocumented immigrant, Ruben Suazo noted that “these challenges formed cracks and holes in what I call my ‘pathway of life’ … but tonight I stand here tall with the hope, faith, resilience and the pursuit of happiness that have fixed such pathway. It is my cape, my shield, it is my pride.”

Sashagale Moore noted, “I struggled a lot throughout the college process due to the fact I wasn’t able to receive as much help from my college counselor due to the fact it was a ratio of 1 to 100 students to one counselor … but with the help from Beat the Odds, my mind has opened up to more colleges … [and I’ve been pushed] to strive for greatness.”

Shirleyka Hector shared, “As a little girl in Haiti, my mother emphasized the value of a higher education every day—no kidding, I mean every day … When I moved here after the devastating earthquake in 2010, life was a bit rough for me, but I survived, thanks be to God.”

She continued, “Although I left my mother behind when I moved here, I still get that push to move forward from my dad. My dad, just like my mother, pushes me to learn as much as I can and take my education seriously.”

Auctioneer CK Swett brought excitement to the evening’s program, auctioning three lots, including a bottle of champage, a minute-long personal greeting from Samuel L. Jackson—which was purchased by guests twice for a total of $15,000, and the chance to attend a New York Knicks game and sit courtside with Spike Lee. Lee helped drive the final price up to $13,000 by sweetening the deal to include a pre-game dinner at Madison Square Garden.