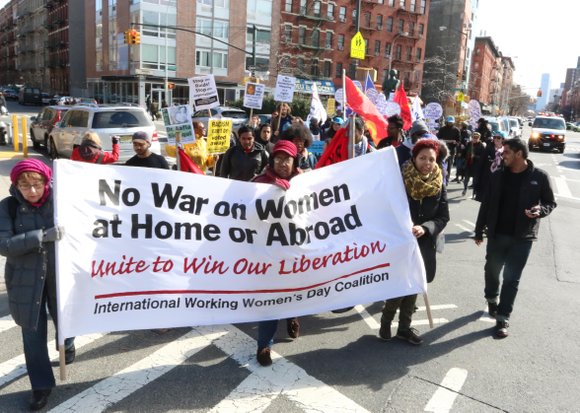 The International Working Women’s Day Coalition 11th March and Rally was held Saturday, March 5 at the feet of the Harriet Tubman Memorial on West 122nd Street (off Saint Nicholas Avenue and Frederick Douglass Boulevard) in Harlem.

The community honored Harriet Tubman’s legacy and the women who continue to fight for justice and freedom by marching east across 125th Street/Martin Luther King Jr. Boulevard. Harlem’s own 97-year-old Florence Rice made the march, too. This treasure, who just celebrated her birthday, is a beloved civil rights activist. She spoke to the group about her trials and tribulations in Harlem’s public housing and her support from then City Councilman Charles Barron, who won her case and got laws put in place to protect any senior with due process.