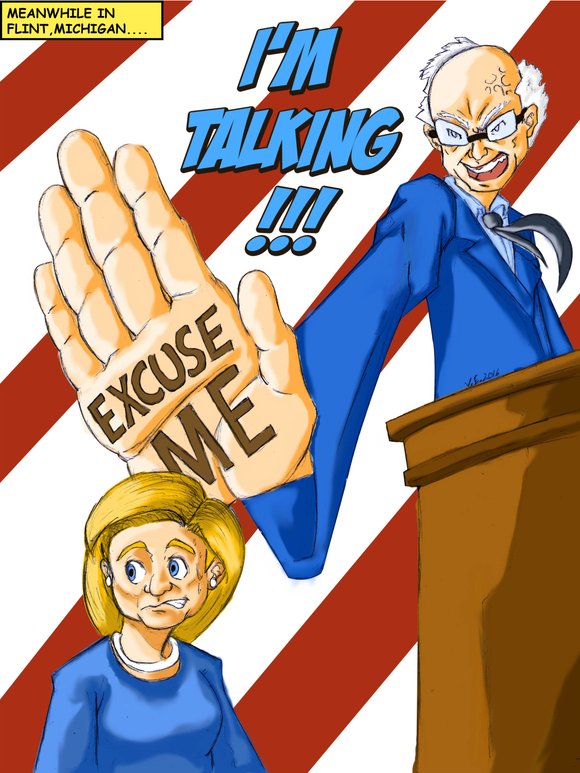 The click you’re hearing is probably the sound of Hillary Clinton’s campaign team recalibrating its message, one that failed to resonate with white men, younger voters and the white working class in Michigan yesterday.

It was a stunning setback for Clinton as the Democratic primaries and caucuses push ahead, though she will split the delegate count and obtain the day’s majority with her overwhelming victory in Mississippi.

“That’s a major, game-changing victory for our campaign,” read the jubilant statement from Sen. Bernie Sanders’ campaign website. “The corporate media counted us out. The pollsters said we were way behind. Super PACs spent millions against us across the country. But we won, again.”

Watching the count come in last night at two cable television shows, Sanders was able to counter Clinton’s strong turnout in Wayne County, particularly in Detroit with its majority African-American population. The victory is a good sign for Sanders, not only rejuvenating his campaign and underscoring his message against Wall Street but also putting his opponent on notice that he’s not a “single issue” candidate and that she is a “regional” candidate.

However, Clinton has amassed her numbers in the South, again with the Black electorate to the rescue. As the numbers came in, Clinton was speaking to a crowd in Cleveland, proudly proclaiming the Mississippi victory and gearing her speech toward Republicans.

One thing is clear from the results in Michigan, and that is the Clinton team better gather the importance of this and the upcoming primaries in Ohio and Illinois because they are similar to post-industrial Michigan.

Sanders may have made some decisive headway in last week’s debate in Flint, Mich., where he stressed the loss of manufacturing jobs during the 1990s, jabbing his fingers at President Bill Clinton’s administration.

There is no refuting the significance of Sanders’ upset, though he still has a long way to go to close the delegate count, especially considering Clinton’s command of so many superdelegates. Even so, that could change if Sanders continues to gain momentum and win big in the next primaries and caucuses.

On the other hand, Donald Trump’s march to Cleveland proceeds without interruption as he took both Michigan and Mississippi. The driving narrative from the GOP ranks is a drum beat to stop Trump and keep Sen. Marco Rubio in the race in order to minimize Trump’s tremendous anti-establishment momentum.

Wednesday’s Democratic debate may be the most important one yet between Sanders and Clinton, and it remains to be seen what tactical changes occur on either side.