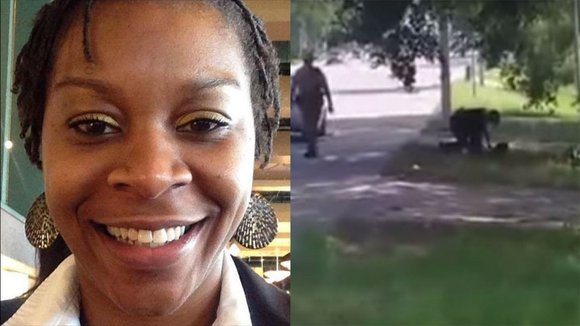 Thursday, March 3, it was announced that the Texas trooper who arrested Sandra Bland last summer prior to her mysterious death, Brian Encinia, was formerly fired after he failed to “rebut disciplinary charges leveled against him in January, Public Safety Director Steven McCraw wrote in a letter of final termination,” reports read.

The firing came after a grand jury indicted him on a perjury charge in January. Soon thereafter, state officials announced plans to terminate him. The grand jury did not believe his reason for removing Bland from her car was so he could conduct a safer search.

Their encounter escalated after the trooper ordered the 28-year-old to put out her cigarette and get out of her vehicle. The cop is seen holding a stun gun and shouting, “I will light you up!” after Bland refuses to exit her car. She eventually complies, and he orders her to the side of the road. They move off camera, but audio can still be heard.

Bland was arrested for assault and taken to the Waller County jail. Three days later, she was found with a plastic garbage bag wrapped around her neck, hanging from a jail cell partition.

Her death was officially ruled a suicide by the county coroner, a claim her family strongly disputes.

The trooper met with Department of Public Safety Director Steve McCraw last month, but it gave the agency leader no reason “to alter my preliminary decision,” according to a termination letter Encinia signed last Wednesday. His attorney, Larkin Eakin, has previously called the indictment unjustified and said Encinia was looking out for his own safety.

Last month the grand jury tied Ecinia’s perjury indictment to his affidavit statement, where he claimed Bland was “combative and uncooperative.”

“I don’t want anyone to suggest that we’re in a fight against law enforcement,” explained Rep. Sheila Jackson Lee, who is demanding that the Justice Department investigate Bland’s death. “We’re in a fight to get the right type of treatment as citizens of this nation, and particularly young men and women of color.”

The family wants access to all files and unedited footage regarding the case.

Since Bland’s death, Encinia had been on modified desk duty and “remained on the payroll after McCraw announced that the agency would begin the process of firing him.”

Although Encinia could appeal the termination, Department of Public Safety spokesman Tom Vinger said that the terminated trooper will remain fired even if he appeals.

Encinia’s firing was upheld by the Texas Department of Public Safety last Tuesday.

Also last Thursday, in a similar suspicious local case of a woman dying in police custody, New York Attorney General Eric Schneiderman announced that his office’s Special Investigations and Prosecutions Unit has released a report outlining the results of their seven-month investigation into the July 27, 2015, death of Raynette Turner in Mt. Vernon, N.Y. Alvin Bragg, chief of the SIPU, led the investigation, which concluded there was no criminal culpability in Turner’s death. They conducted reviews of forensics evidence and examined video footage of the time Turner was in custody.

The Westchester County medical examiner conducted the official autopsy, releasing the report, along with the video footage last Wednesday. It concluded that Turner died of natural causes.

“Ms. Turner’s death was a tragedy, and the public deserves all of the facts,” Schneiderman said. “I commend Alvin Bragg and the Special Investigations and Prosecutions Unit for completing a fair, comprehensive and independent investigation. This report reflects my office’s commitment to providing a thorough and deliberate review in each and every one of these cases, and to make sure that the full results of our investigation are provided to the public. Finally, I hope that state and local officials will act on the reforms we have proposed without delay.”