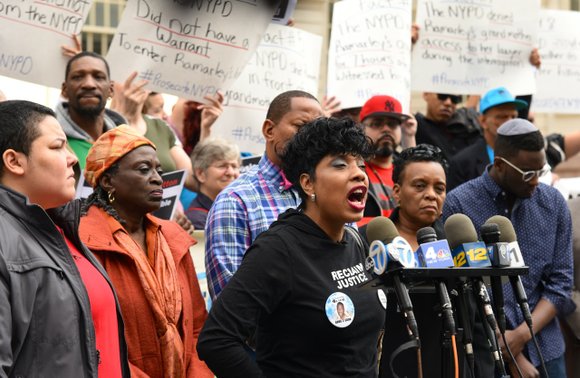 The mother of 2012 police shooting victim Ramarley Graham, 19, told the AmNews, “I asked de Blasio for a meeting, and we still haven’t got a response from him yet. Let me find out that you’re not going to do your job, and you are going to be a one-term mayor.”

"The death of Ramarley Graham was a tragedy, and our heart breaks for the family of Mr. Graham," said Monica Klein, Deputy Press Secretary for the Mayor's office. "Now that the federal announcement has been made, NYPD is proceeding with their internal disciplinary process.

Speaking at a City Hall press conference, the angry mom stated that she wants the mayor and police commissioner to punish and fire the officer involved in the unprovoked shooting death of her son. “These officers who were involved in my son’s killing should not be running around with a gun or a badge!” she declared. “They are reckless! They murdered my son in front of my 6-year-old son and his grandmother. … It’s been four years and we still have no answers. All an officer has to say is ‘I thought ...’ and that’s his get-out-of-jail card. We can’t allow that any more.”

Tuesday, March 8, Preet Bharara, U.S. attorney for the Southern District of New York, announced that he would not pursue charges against the officers responsible for the Feb. 2, 2012, killing of Graham. Malcolm stood on the plaza at City Hall last Thursday with several other families of victims’ of fatal police bullets, along with a host of supporters, including Assemblyman Charles Barron and City Council Members Inez Barron, Andy King and Robert Cornegy. They called on Mayor Bill de Blasio and NYPD Commissioner Bill Bratton to fire shooter officer Richard Haste and all the officers involved in the killing and subsequent treatment of the family.

Graham’s family is looking squarely at de Blasio for answers.

“We are tired of hearing the de Blasio administration respond to the murder of our son and continued injustice with PR responses about training and community policing,” continued Malcolm. “If this administration is truly committed to demonstrating that Black lives matter and resolving issues of police abuse, they can only do that by taking action and being serious about holding officers accountable. There’s no excuse that holds any weight. They should fire officer Haste, Sergeant Scott Morris and all officers responsible for murdering Ramarley, the abusive treatment of our family and the attempted cover-up.”

The family is not only outraged with the police for chasing an unarmed Graham into his home, breaking in the door without a warrant and shooting the teen in his bathroom in front of his grandmother and 6-year-old brother, they are also demanding answers into the immediate severe questioning of his distraught grandmother for seven hours. Malcolm says that when she went to the precinct to find out what happened to her son and find his grandmother, she was assaulted by officers. To make matters even worse, the family has charged that the city “misplaced” Graham’s body for four days after he was killed.