Nation of Islam students return to the United Nations 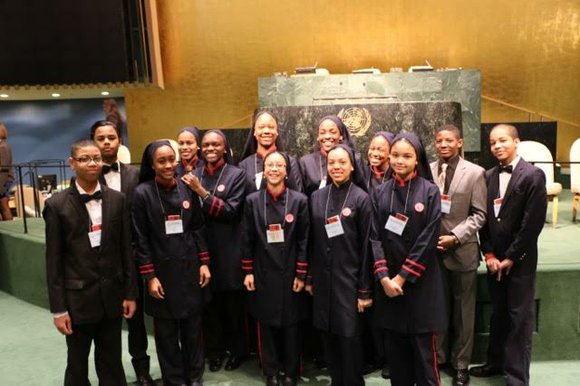 Nation of Islam students at the United Nations Contributed

For the second year in a row, students from Muhammad’s University of Islam in Chicago attended the National High School Model U.N. conference held in New York City. The conference, established in 1975, spans a four-day period and involves 3,500 delegates from 40 nations in order to represent the global mindset that, according to the U.N., “would be required in today’s society and future generation to come.”

Thirteen students from the MUI attended this year’s conference as representatives of the Central American nation of Belize. In 2015, 17 MUI students represented the nation of Haiti. The students represent their assigned nations in simulated committee meetings and plenary sessions at the Hilton Hotel in Midtown Manhattan. Closing ceremonies are held in the U.N. General Assembly chamber on 42nd Street.

“Last year I had no idea what I was getting into,” Amina Muhammad, 16, told the AmNews after returning to Chicago. “I wasn’t even aware of the U.N. Our committee was tasked with developing resolutions that would help small island nations such as Belize. When we talked with the Permanent Ambassador Lois M. Young from Belize, she talked about how small nations don’t have strong voice in the U.N.”

The MUI students learned from the ambassador the truth concerning international relations, power, greed, money and the overwhelming influence that major nations exert on smaller nations. “She echoed much of what we have learned from Minister [Louis] Farrakhan,” Amina noted.

Khalifa Muhammad, 14, said that having attended the conference in 2015, he was better prepared to present his ideas. “The most important thing was to make the solutions good for everybody, not just a few,” he told the AmNews. “Belize is facing the loss of its marine biology, and they have to turn to the U.N. for help.”

“We developed a system to deliver potable water and to make sure that the water reached the rural areas,” stated Amatullah Muhammad, 14. She told the AmNews that her committee insisted on finding out how drinking water in places such as Belize is being polluted and how to penalize companies that are responsible.

“You know all of this is up to Allah—it’s in his hands,” Amatullah said.

“It is extremely important that our students experience the coming of the new kingdom of Allah, and that it is not just talk,” stated Jason Karriem, interim director of the MUI. “It is also important that our students learn that they can compete with their peers and still feel confident in practicing the teachings of the Honorable Elijah Muhammad.”

The MUI students this year were treated to a tour of historical NOI facilities such as the site of the first MUI in New York City located on 116th Street. There was also a visit to the historical house once occupied by Ministers Malcolm Shabazz and Farrakhan in Queens. The historic tour ended with the students gathering in front of Muhammad’s Mosque No. 7 in Harlem.

“We wanted the students to know how much we loved and respected them,” stated Student Minister Abdul Hafeez Muhammad, Farrakhan’s representative in New York City. “We wanted them to feel our spirit.”