Obama on terror attacks: 'We stand in solidarity' with Belgium 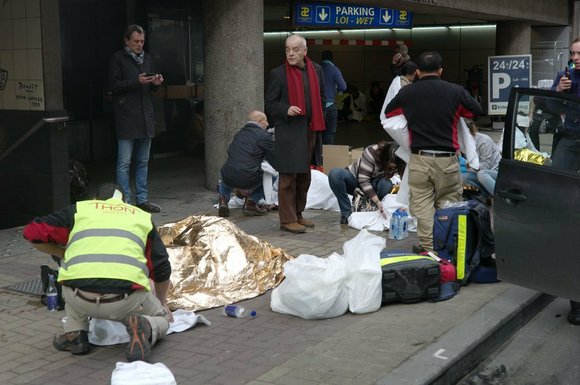 Three explosions that ripped through Belgium on Tuesday, March 22, 2016 killed at least 26 people, according to Belgian media, and raised the specter of terror once again in the heart of Europe. Pictured are people wounded outside Maelbeek Metro Station in Brussels. Dirk Alaerts/Twitter

(CNN) -- The U.S. will do whatever it can to help Belgium bring to justice those responsible for Tuesday's terror attacks, President Barack Obama declared Tuesday.

Obama urged international unity in the fight against terror after the attacks left at least 34 people dead.

"We will do whatever is necessary to support our friend and ally Belgium in bringing to justice those who are responsible," Obama said in brief remarks while in Cuba, where he was making an address to the Cuban people after his administration ended decades of estrangement between the two countries.

The President said that the thoughts and prayers of Americans are with the people of Belgium, "and we stand in solidarity with them in condemning these outrageous attacks against innocent people."

“NYPD is on increased alert across our city. While we take this threat seriously, we will not live in fear. Our lives will continue today in honor of those lost to terrorism. Securing New York City is our show of solidarity with the people of Brussels and the victims of terrorism worldwide.”

"This is yet another reminder that the world must unite," Obama said. "We must be together regardless of nationality or race or faith in fighting against the scourge of terrorism."

Obama is set to travel to Argentina later Tuesday and officials said there were no plans to cancel that leg of his trip. There has also been no indication that he is changing his plan to attend a baseball game between the Tampa Bay Devil Rays and the Cuban national team or his meeting with dissidents.

Back in Washington, and other major U.S. cities such as New York, Chicago and Los Angeles, police and security officials added extra patrols and sweeps at airports, subways and train stations.

"We can and will defeat those who threaten the safety and security of people all around the world," Obama said.

Secretary of State John Kerry also reached out to his counterpart, Foreign Minister Didier Reynders, to offer U.S. support for Belgian investigators as they piece together the events leading up to the attacks.

Three attacks on a metro train and at an airport in Belgium's capital city of Brussels on Tuesday have killed at least 34 people and wounded about 170 more, according to Belgian media.

Three American missionaries were seriously injured in the blast, according to a statement from the Church of Latter Day Saints. The three Mormons were serving at a mission in Pars, France, and had been accompanying a fourth missionary on her way to an assignment in Ohio.

The attacks follow the Friday capture in Brussels of Salah Abdelslam, an organizer of the November terror attacks in Paris that targeted cafes, restaurants, a concert hall and stadium, killing 130 people and injuring more than 350.

ISIS claimed responsibility for those attacks, declaring them retaliation for France's participation in airstrikes against the terror group in Syria and Iraq.

At the time of Abdelslam's capture, Belgian Foreign Minister Didier Reynders told the media that Abdelslam was "ready to restart something in Brussels," that he'd established a new network of people around him and that a large weapons cache had been found.