Post-season proves short for NY and NJ Division I teams 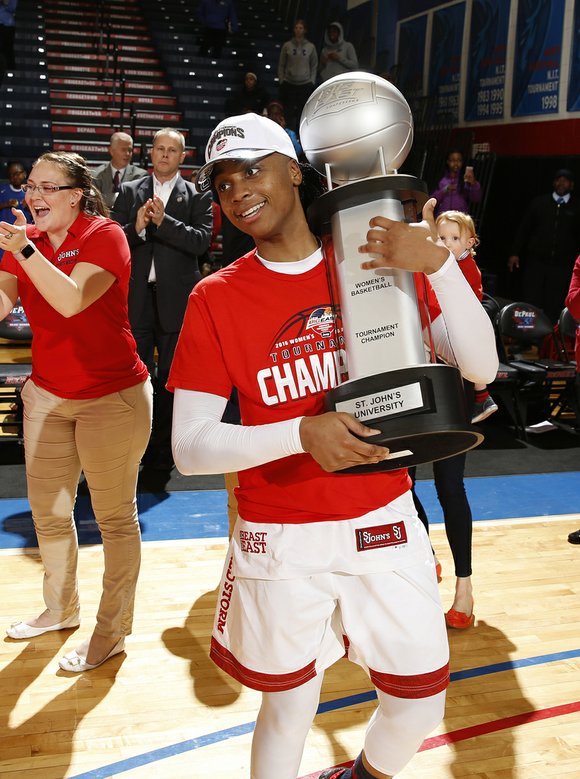 A first round loss in the NCAA Tournament marked the conclusion of Danaejah Grant's (shown here with the Big East Trophy) college career. St. John's photo

It was one and done for the five teams from New York and New Jersey playing in the Division I NCAA Women’s Basketball Tournament. Some were outmatched from the get-go and others battled to the finish, but each team saw its season come to an end.

Army West Point lost to Syracuse University 73-56. A 39-14 first-half deficit put the Black Knights in too deep of a hole to overcome, despite outscoring Syracuse in the second half. Senior guard Kelsey Minato, the first active cadet to have her jersey retired, finished her collegiate career with 2,556 total points.

With a history-making at-large bid, the goal of Princeton University’s players was to go even deeper into the tournament than it did in 2015, when the Tigers won their first-round game. It wasn’t to be, as Princeton fell 74-65 to University of West Virginia.

Stony Brook University went out in the first round of the Women’s Basketball Invitational, losing 67-60 to Youngstown State. In the post-season WNIT, a tournament that Rutgers University won in 2014, the Scarlet Knights lost in the second round to the University of Virginia, 71-55. For years, Rutgers was a consistent presence in the NCAA Tournament, losing to the University of Tennessee in the championship game in 2007. Now coach C. Vivian Stringer has to figure out how to put her team back on a winning track.

The only NY/NJ team still in post-season action is Hofstra University, which advanced to the third round of the WNIT.