Hillary Clinton asks New Yorkers to have her back -- again 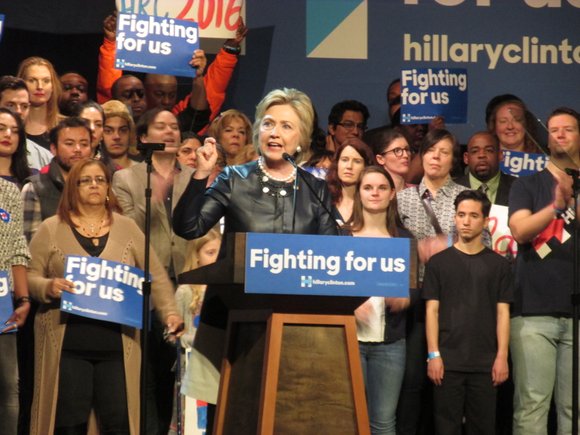 HARLEM, New York (CNN) -- Hillary Clinton asked New Yorkers to back her in 2000 as the first first lady to run for Senate. She asked for their help again when she ran for re-election in 2006 and president in 2008.

At the famous Apollo Theater on Wednesday, Clinton asked again.

"I am not taking anything or anyone for granted. We are going to work for every vote in every part of this state, just like I did when I ran for the Senate," Clinton said to a fired-up crowd in the ornate theater. "Because New Yorkers took a chance on me and I will never forget that."

Clinton symbolically kicked off her New York campaign with the rally in Harlem, where she focused on the two men who have become her main opponents: Republican front-runner Donald Trump and upstart Democratic challenger Bernie Sanders.

But Clinton's rally was more of a homecoming than a targeted hit on either candidate. Clinton was joined at the event by Charlie Rangel, the congressman who led the charge to get her to run for Senate in 2000, and Chuck Schumer, the senator with whom she served for eight years.

"You have always had my back and I have always tried to have yours," Clinton said. "When I think back to those eight eventful years that I served you, there were some hard times, weren't there? But we pulled together," she added, noting the terrorist attacks that rocked New York on September 11, 2001.

Clinton, clearly at ease back in New York, enjoyed the roar of the boisterous crowd. When she told the audience it was a "thrill to be live at the Apollo," she was greeted by screams of "Welcome home Hillary" from the audience.

New York has not always been Clinton's home, however. Born in Illinois and married in Arkansas, Clinton moved to New York in order to run for Senate in 1999 and had to fight off accusations of carpetbagging.

But New York has become Clinton's home. While Hillary and Bill Clinton maintain a home in Washington and an apartment in Arkansas, they both identify as New Yorkers and call Chappaqua, a pastoral hamlet north of New York City, home.

"We know her. We love her. And we can't wait for her to be president," Schumer said while introducing Clinton.

"She may not always talk like us Brooklynites talk," Schumer added, emphasizing his Brooklyn accent by subbing the "l" in talk with a "w." "But when she speaks out, she changes minds, she changes hearts, she moves to action and she changes outcomes."

Clinton is currently in a closer-than-anticipated race for New York, however. Sanders, a candidate born and raised in Brooklyn, has surprised some campaign aides with his longevity and has pledged to run hard in New York.

On Wednesday, Clinton said many of Sanders' ideas "won't pass, others just won't work, because the numbers just don't add up and that means people won't get the help that they need and deserve."

"Now my opponent says, 'Well, we just aren't thinking big enough,'" Clinton said, somewhat mimicking Sanders' New York drawl. "Well, this is New York. Nobody dreams bigger than we do. But this is a city that likes to get things done. And that is what we want from our president, too."