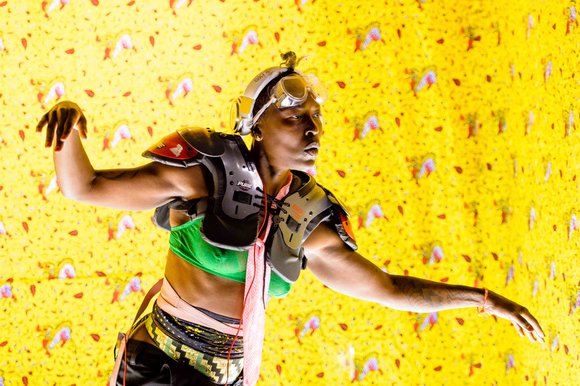 Celebrating their 45th anniversary, Ballet Hispanico returns to the Joyce Theater, with eight performances featuring a New York premiere plus a special matinee for children and families. Under artistic director and CEO Eduardo Vilaro, a double-bill of Spanish favorites is slated for the season: the premiere of Gustavo Ramírez Sansano’s “Flabbergast” and the revival of Ramón Oller’s “Bury Me Standing.” “Club Havana” by Cuban-American choreographer Pedro Ruiz will also return. Finally, for the second year, the special matinee, “En Familia” will offer a “fun-filled journey through Latin American dance and culture.” For more information, visit www.joyce.org.

The Zimbabwe-born dancer-choreographer Nora Chipaumire will premiere “Portrait of Myself As My Father,” an “…exploration of the Black Body,” plus her short film, “Afro Promo #1: Kinglady,” in New Jersey at Peak Performances. With “Portrait of Myself As My Father,” according to the press release, Chipaumire “…tackles our idea of masculinity with her fearless investigation of Africa and the Black body.” For this iteration of the work, Chipaumire and Sénégalese performer Pap Ibrahima Ndiaye (“Kaolack”) are tethered together in a simulated boxing ring, where they seemingly move through “…a sinuous laboratory of heart, sweat and muscle,” notes the release. For more information, visit www.peakperfs.org.