Clinton's warning: Obama's legacy is on the line with Trump 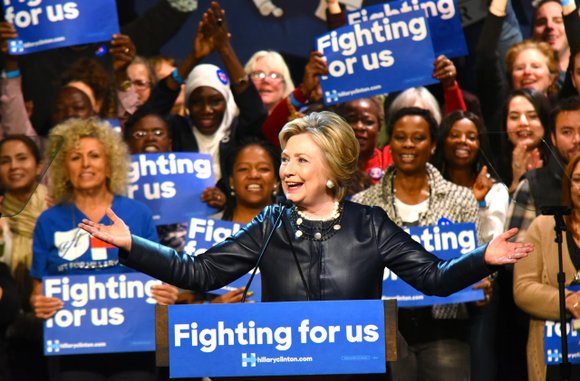 DETROIT (CNN) -- Hillary Clinton warned the roughly 6,000 people at an NAACP dinner in Detroit on Sunday that Donald Trump's candidacy is the biggest risk to President Barack Obama's legacy, putting the decision between her and the Republican front-runner in stark terms.

While Clinton routinely touts Obama and knocks Trump, her remarks to the National Association for the Advancement of Colored People chapter dinner is further than she has gone before, warning that the 2016 election is about "unity versus division, compassion versus selfishness and love versus hate."

"Now America's decision is who will succeed him," Clinton said of Obama before hitting Trump for questioning the President's birth certificate and initially failing to disavow white supremacists who are supporting his campaign.

"We can't let Barack Obama's legacy fall into Donald Trump's hands," Clinton said. "We can't let all the hard work and progress we've obtained over the last seven-and-a-half years be torn away."

As Trump has closed in on winning the Republican presidential nomination, Clinton has started to hit the billionaire businessman with more frequency and fervor, routinely devoting almost all of the attack lines in her stump speech to the GOP front-runner.

Trump has returned fire, tagging Clinton "Crooked Hillary" and charging that the only reason people support her to be president is because she is a woman.

As she does routinely at largely African-American events, Clinton touted her closeness to Obama, her one-time rival. But on Sunday, Clinton broadened her plaudits and began to evaluate Obama's legacy.

"We have been blessed to have this strong thoughtful leader sitting in the Oval Office and exceptional first lady sitting by his side," Clinton said. "They have made us proud. They have represented America to the world with style and grace and it is up to us to make sure that when they leave the White House the concerns and priorities they champion, the hopes and dreams that Americans have entrusted to them, don't also leave."

But as if to dispel any doubt about who her speech was aimed at, Clinton closed by targeting Trump once again.

"Let's make sure," she said, "love trumps hate once and for all."