What's it like to apply to college from one of America's poorest neighborhoods?

CNNMoney followed 5 seniors in the Bronx, NY this year. 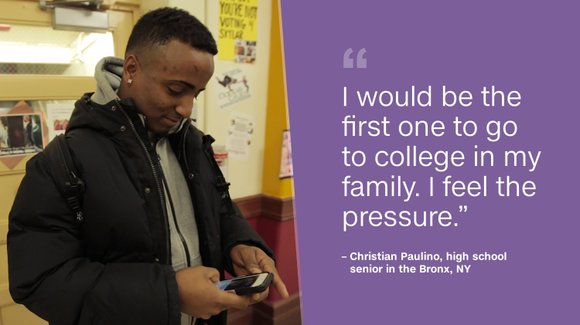 Christian Paulino is a high school senior in the Bronx, NY and will be the first one in his family to attend college. Jordan Malte/CNNMoney

In some ways, Morris Academy is typical of high schools in poor neighborhoods. Nearly all the students are on the free lunch program and some routinely skip school.

But Morris Academy has something special: mostly young and scrappy teachers and staff. They work Wall Street kind of hours, texting and calling kids to hound them to show up to school and get assignments done. The school partners with everyone from college counseling non-profits to JROTC to get more resources for the school.

"Morris Academy is a really unique school compared to other low achieving NYC high schools," says Emma Wen, a college advisor funded by College Advising Corps, who started at the school in the fall.

Teachers also talk about college non-stop. On every classroom door, teachers list where they went to university to expose students to the names and logos of more schools. Last year, 42% of seniors went on to enroll in college. Everyone wants that to be higher, but it's a big increase from just a few years ago.

I'd be the first in my family to go to college

"Students were already very excited about the idea of college when I first met them," says Wen.

The pro-college message has gotten through to Christian Paulino. He's a classmate of Olatunde's and will be the first one in his family to attend college.

"I feel the pressure," says Paulino, who wants to be a New York City cop. His family's first born, he has set a high bar for himself and knows his younger brother and sister watch him.

Born in Puerto Rico, Paulino speaks English as a second language. His mother and siblings have moved so many times that Paulino has struggled to catch up in school.

"I had nobody to look out for me," he says, until he met the baseball coach and principal at Morris Academy. They became his mentors, even tracking him down if he forgot to go to class.

"My baseball coach is always telling me: education first, baseball second," says Paulino. He had hoped to play baseball in college, but he his first choice school -- Jefferson Community College -- didn't give him much aid. His mom only earns about $20,000 a year and can't take out loans.

Paulino is trying to decide what to do. He will probably keep living at home and attend a community college nearby. It's a common trend for low-income and minority students to start off at community college.

For many students from poorer families, getting into college, let alone graduating from college, takes courage and a lot of mentoring.

Olatunde made her decision to attend York College partly because of its SEEK Program, which provides special academic, finance and counseling assistance to help first generation college students succeed. She has already been on the campus several times and made some friends. Over the summer, Olatunde will take pre-college courses to ensure she's ready in the fall.

As Michelle Obama told Olatunde and other high school seniors last week, "Ask for help ya'll. No one gets through college alone."