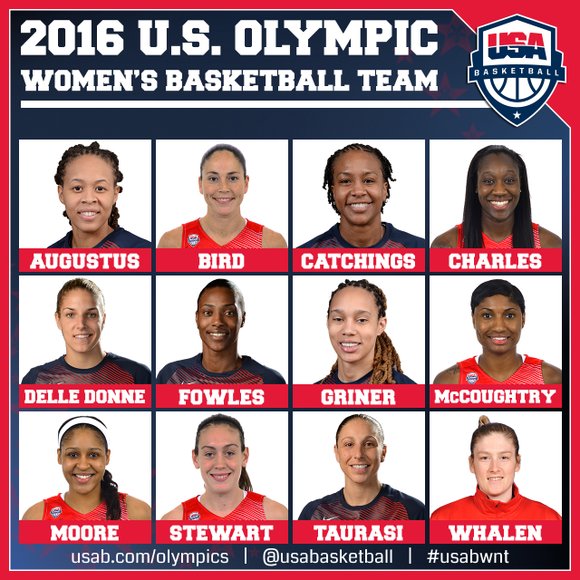 Both New York and the New York Liberty will be represented at this summer’s Olympic Games in Rio de Janeiro, Brazil. Queens native Tina Charles and Long Islander Sue Bird, both graduates of Christ the King High School and the University of Connecticut, were named to the 12-player women’s basketball roster. It’s a second Olympics for Charles and a fourth for Bird. The women’s basketball team, which is aiming for a sixth consecutive Olympic gold medal, was introduced last week at a 100 Days to Rio event in Times Square.

“It was a great atmosphere,” said Charles. “Great anticipation. Everybody’s eager to represent Team USA. It was really cool to be in Times Square, have the camaraderie with the team and the other Olympic athletes.”

“Being born and raised in Queens, New York and being a fan of the New York Liberty … it’s all coming full circle for me personally,” Charles said. “I’m able to represent New York. It’s very special for me.”

Charles is more than happy to make time in her already packed schedule for Olympic play. Because of WNBA commitments, the U.S. team will not have time for a lengthy training camp, so they have to work hard and smart. Each player accepts her role, which may be totally different from what she typically plays in the WNBA or with an overseas team.

“You’re representing your country,” said Charles. “You’re representing home, the USA. Whatever the coaching staff needs from us in order to get a gold medal, we do. … The fact that we’re able to do what we’ve done and going for number six in a row is a big accomplishment. [Being part of history] means everything to me.”

The Liberty lost to the Chicago Sky in their first preseason game 59–93, which was held at the University of Delaware in honor of Sky forward and reigning WNBA MVP, Elena Delle Donne. The Liberty are in preseason action again tonight at Columbia University.