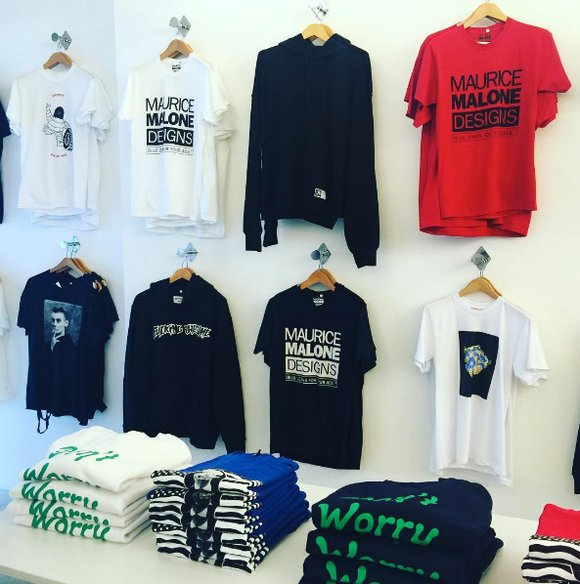 At the recent New York Fashion Week presentations, designer Shayne Oliver’s collection was amazing. Making his debut, Oliver is the owner of the label, and his show had a standing-room-only crowd. It is always a delight to view a new designer’s collection on the bill, especially if the designer is African- American. Oliver’s looks are off-the-shoulder, bare, highly detailed, different and fashionable. His raincoat ensembles with matching pants are chic. There is a longer, pleated skirt that flows softly and splits to show the leg as you walk. Platform sandals are back and strapped up the leg. These kicks were shown with all of his outfits. Magnificent details included wrapped scarves that fall ever-so-slightly off the shoulders, draped designs, lace looks and slip-strap styles. A fabulous, shapely short skirt was topped with a barely there white top that sports two fly front zippers. Think vampire luxury and hip-hop fashions for women who live on the edge. Hood by Air, founded in 2006, is presently the convergence of an ensemble of artists. Oliver is the creative director and also works in music, fashion image consulting, show business and performance. Their work is grounded in radical interrogations of clothes for the body.

In Brooklyn’s Williamsburg Garment Company, Maurice Malone has reissued a collection of his popular 1990s T-shirts. Malone was a young hip-hop designer whose first collection helped to define a new market in the early 1990s. He deactivated his urban collection in 2001 to focus on his designer collection, and he also created a line of fitted jeans. This collection is the iconic line of T-shirts and logos that jolted him towards the top of the denim market in the early ’90s. Malone’s line is available exclusively at Opening Ceremony and Williamsburg Garment Company.