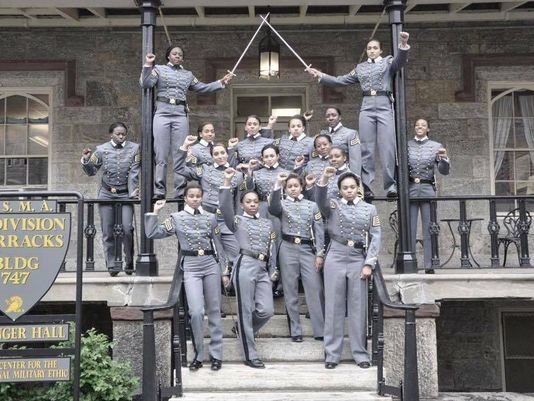 Solidarity, support, resistance, unity, perseverance and pride—all these things have come to define what the clenched fist represents.

Its use goes back to 1917 and it was seen in Mexico in 1948. The clenched fist was politically exposed in the French and Russian and American Communist parties. The clenched fist is also a symbol for feminism. Robin Morgan, author of “Sisterhood Is Powerful”, used the closed fist as an emblem on the cover of her book.

The clenched fist is nothing new. It is a representation of perseverance through struggle to empower whichever entity it represents. The Black female cadets at the United States Military Academy at West Point used the clenched fist to pose for a photo after graduating from Army Officer training. Certain questions surfaced in the past few days of the appropriateness of their pose. The military has strict regulations regarding active duty personnel participation in political activities (DoD Directive 1344.10). Photos at graduation are very historic and they represent the organization and unit.

The cadets used this pose to advocate Black empowerment and feminism (nothing political)—to say WE ARE. We are proud. Perhaps because they are all African-American females, the public immediately related this clenched fist representation to the Black Panther Party (which wasn’t necessarily a negative organization) and Black Power. Before we make that assumption, we have to ask ourselves if these young ladies were Caucasian females holding a clenched fist, would it get any attention. I don’t think it would. I think it would be played down and looked at as “Oh look, they are saying girl power.” What about if it were a group of males, would it be critiqued? Anytime there is a group of Black people celebrating their achievements, unified, America pulls out their magnifying glass and starts questioning and critiquing.

Is this the only way that we can achieve anything in America, by suppressing who we are? By denying that we are in fact proud of who we are? The only way we can announce who we are in government organizations is when it is Black History Month or during a multicultural celebration that the government approves to say they promote diversity. After those days are over we whisper, whisper until February comes, whisper the word “Black.” Try not to act too “Black,” as if it’s a curse until Black History Month comes again.

On May 10, Lt. Gen. Robert L. Caslen Jr., the superintendent of West Point, made a very smart decision by not choosing to impose disciplinary actions on these cadets for their pose because if he had, he would have contradicted the very things the military promotes. West Point would need to do away with the diversity committees they so strongly promote, do away with their multicultural celebrations. You cannot promote these type of events but then look for an instruction to denounce a certain group for their Black feminism and pride.

This incident is not the first time the military has become inquisitive regarding Blackness. Remember Jessica Simms, the U.S Navy sailor who was discharged for refusing to trim her dreadlocks back in 2014? The DoD didn’t know what to do when Black females decided to embrace their natural hair type and not look at neat and tidy hair as straight hair pulled in a bun or a cut shoulder length bob. A lot of DoD instructions are outdated and they are dealing with a military today (according to Defense Manpower Research) consisting of 17.8 percent African- Americans. Instructions need to be updated and created to reflect minorities’ cultures and respect their traditions other than during multicultural celebration. It is still the military and they have to maintain professionalism, but who is to say what is considered professional? A lot of instructions are not specific and very polarized.