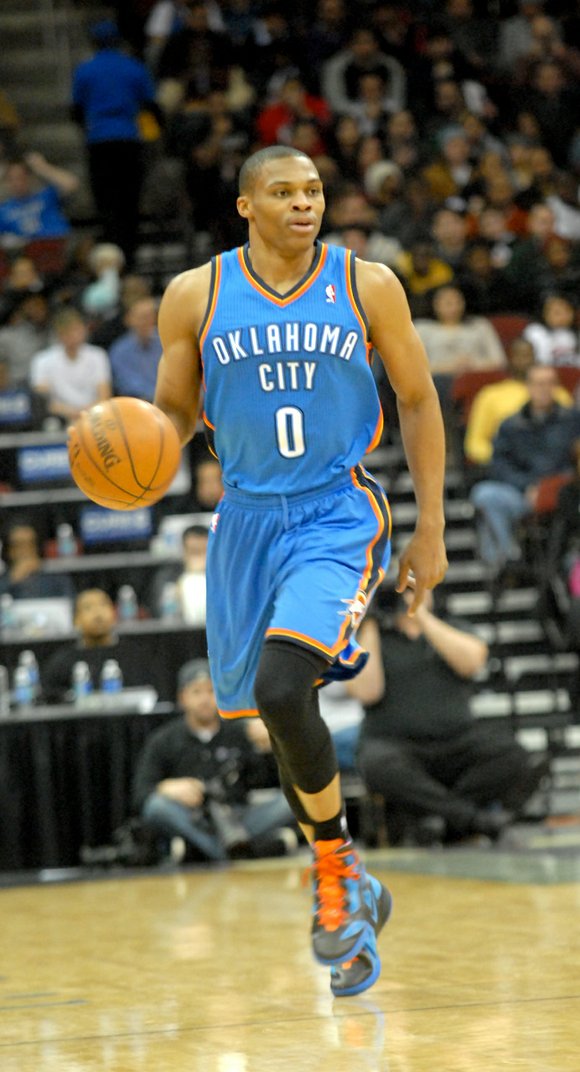 When the San Antonio Spurs play the Oklahoma Thunder tonight, Thursday, in Oklahoma, Game 6 of the second round of NBA playoffs, OKC will count on their younger legs to get them to the next round of NBA playoffs, the Western Conference Finals. Oklahoma, the lower seed, like the Portland Trailblazers, who are playing the Golden State Warriors in the other Western Conference matchup, and the Miami Heat against the Toronto Raptors, the remaining Eastern Conference series, have made these games thrilling, exciting, run-run basketball.

OKC, the three seed, led by small forward Kevin Durant and point guard Russell Westbrook, who was one assist away Tuesday night from a triple-double, are both 27. Up three games to two, they’re in a position to close the door on the Spurs, the second-best team in the NBA, and also on average, the second oldest. Three of their five starters are 30-plus: Tim Duncan, 40, Tony Parker, 33 and LaMarcus Aldridge, 30.

The average age of the Thunder’s roster is 26.7. Will that be a factor if there’s an overtime tonight, and/ or a Game 7 Sunday if one needed?

Younger legs? San Antonio ran out of steam in last season’s playoffs, losing in the seventh game of the first round to the Los Angeles Clippers.

Like Monday night’s overtime games between Toronto and Miami, and between Golden State versus Portland, that game could have gone either way.

Portland knows what made it go the way of the Warriors Monday night. They know what changed their fortunes. If they’re home today, Thursday, done, instead of preparing for Game 6 tomorrow night, Friday, in their arena, they know that it was because of the spectacular return of Stephen Curry, also just unanimously voted the league’s MVP. He’s won it two years in a row.

Curry left Blazer fans disconcerted and dismayed, just plain jacking them of Game 4, scoring 40 points in 37 minutes Monday night. Seventeen points during the five-minute overtime, the most ever in an NBA regular season or playoff overtime game.

“We were right there. We were one or two stops from winning,” said Portland guard Damian Lillard, who led the Blazers with 36 points and 10 assists.

Curry, feeling the rust of not playing, got off to a slow start, missing his first nine 3-pointers. “I figured that he’d find his stroke and make a few shots, but I mean, that was crazy,” said Warriors head coach Steve Kerr.

“It took me a while to get into the flow,” said Curry. “When you miss three weeks, it’s really weird walking back onto the court.”

Portland can also blame referee Steve Foster for throwing Curry’s replacement, Shaun Livingston, out of the game in the second quarter for questioning an obvious blown foul call on his lay-up. Issuing one technical foul was enough. Livingston had been filling in with double-digit points. His sudden departure initiated more unexpected minutes for Curry. Said Kerr, “We were expecting to play Steph 25 minutes, to see how he held up.”