DanceAfrica 2016: A celebration in movement, rhythm and spirit 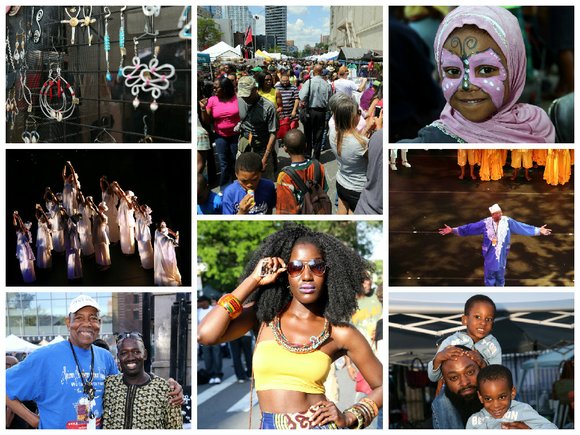 This Memorial Day weekend, the 39th annual DanceAfrica celebration promises to fill the Brooklyn Academy of Music and its surrounding community with a dynamic display of dance, music, film, food, fashion and more as it has done since it was founded in 1977 by Baba Chuck Davis, but this time there’s something different. The nation’s largest festival dedicated to African dance and culture now has a new artistic director, Abdel R. Salaam.

Two years ago, after discussing a succession plan with DanceAfrica’s Council of Elders, Davis announced that he was “happily moving aside to allow for fresh, new ideas from my ‘Dance son,’ Brother Abdel R. Salaam.” This year, Salaam’s first at the helm of DanceAfrica, he will seek to strike the delicate balance between time-honored tradition and bold new ideas.

“Chuck is my Dance Baba, my dance father,” Salaam says humbly, offering a condensed version of his experience, which includes Lehman College’s fine arts program and studying or dancing with Thelma Hill, Eleo Pomare, Fred Benjamin, Ronald Pratt, Louis Falco, Juan Antonio and Paul Sanasardo.“I met Chuck in the summer of 1970. I had never done any traditional African dance and was just starting my dance career through my dance mother, Joan Miller, a fierce feminist and sociopolitical progressive who was way ahead of her time.”

He joined what was then the Chuck Davis Dance Company and caught the eye of critics impressed with his powerfully athletic presence. Gradually, Salaam worked his way up through the ranks, becoming Davis’ dance captain and assistant artistic director, even performing in the first DanceAfrica festival. Davis encouraged him to spread his wings. “Chuck opened the door for me to begin choreographing,” said Salaam.

In 1981, Salaam struck out on his own, founding his own company, Forces of Nature, and making forays into arts education, theater, music, fashion and more, with each inspired and informed by frequent trips to Africa. Salaam wants his rich life and artistic experience to be reflected in his work as artistic director of DanceAfrica.

He recalled that when the time came to pass the torch, Davis said to him, “You do you. I don’t want to see a Xerox copy of Chuck Davis. DanceAfrica has to be continually created.”

Salaam also recalled, “One of the reviewers said, ‘It’s difficult shoes for Abdel Salaam to fill.’” He added, “Well, no, it’s not ‘cause I ain’t trying to fill those shoes. Chuck, now artistic director emeritus, still has much to contribute. He will be here this year doing his master of ceremonies thing.

“My mission in pulling together this year’s program is to push the boundaries of DanceAfrica to bridge the Diaspora, the contemporary and the traditional voice of the African Diaspora and demonstrate to present and future audiences the infinite possibilities of what this culture has to offer in the development of our society. We need to understand how this traditional and contemporary culture from the African Diaspora can help us heal the problems here and in Africa.”

Salaam said DanceAfrica 2016 will continue to showcase the Diaspora’s diverse culture, honor the elders and enhance a sense of community, all while bringing something new to the table, namely, his passion for the fusion of traditional African dance styles with modern, hip-hop, ballet and more.

“Culture is dynamic,” Salaam said. “It’s not static. This, my first DanceAfrica’s program. It is called ‘Senegal: Doors of Ancient Futures.’ It was inspired by my vision, during a trip to Africa just last December, of the Door of No Return. But, standing in the Door of No Return, I realized this is not the Door of No Return because we’ve been coming back and forth now for years. This door is the way for us to peer into our past and nurture those memories while looking at our present and contemplating our future.” It was during this recent trip that Salaam saw vernacular work, contemporary work, hip-hop and religious work by the companies being presented during DanceAfrica 2016.

DanceAfrica 2016 offers a taste of the rhythm, movement and spirit of Senegal past and present by welcoming two Dakar-based companies: Les Ballets de la Renaissance Africaine “Waato Siita,” featuring the best percussionists and dancers of Senegal, and Compagnie Tenane, a dynamic troupe that mixes contemporary styles and traditional Senegalese movement.

In addition, DanceAfrica’s beloved bazaar, which is open between May 28 and May 30, will feature more than 150 vendors from around the world, offering African, Caribbean and African-American food, crafts and fashion. May 20 and 21, Dakar-born singer and composer Youssou N’Dour returns to BAM for two evenings with his longtime band, Le Super Étoile de Dakar, and a tribute to Senegalese drummer Doudou N’Diaye Rose, who passed away last year.

From May 25 to May 30, FilmAfrica 2016, the cinematic companion to the annual DanceAfrica celebration, features the best

fiction and documentary from Ghana, Sudan, Kenya, Nigeria and beyond, including a special focus on Senegal. And Senegalese photographer Omar Victor Diop will be the focus of BAM Visual Art, which presents a series of his portraits capturing faces of contemporary Africa’s emerging artists.

“I’m so excited,” Salaam said. “Obviously it’s my first one and I’m nervous, but as one of my dance teachers, Thelma Hill, used to say, ‘If you ever get to the point where you don’t feel a bit nervous before you go out on stage you need to rethink what you’re doing because that means you don’t care any more.’”

BAM Executive Director Joseph V. Melillo has praised Salaam as “an artist very much in the global realm and committed to tradition.” What’s more, he cares deeply about this culture’s tradition and its future.