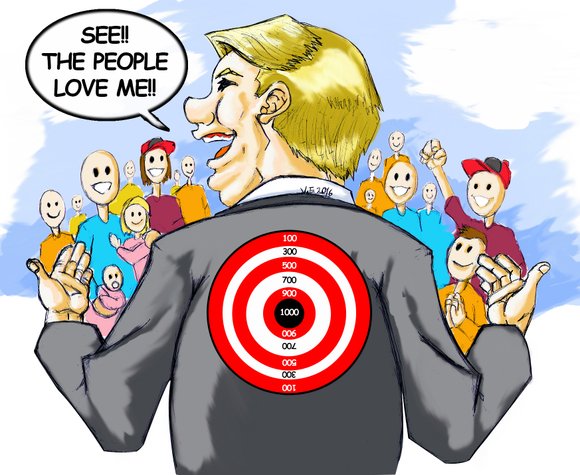 Yesterday, Donald Trump insulted the Pope and the Dalai Lama. Not really. But because he’s insulted everybody else, they could very well be on his hit list. During his presidential run, he insulted all of his opponents, including Dr. Ben Carson, who in his opinion was not qualified to be president.

Trump has repeatedly promised to build a wall at the U.S.-Mexico border, said he would ban Muslims from entering the country and said that women who have abortions should be punished. He later recanted on the last, but added a few more.

The sad thing about all of this divisive rhetoric is that he’s the presumptive Republican nominee, which means that no matter what he says, there are millions of voters who believe he should be the next president.

Recent polls suggest the same, particularly in key swing states such as Florida, Ohio and Pennsylvania, where he’s either tied or leads Hillary Clinton.

More than being an anti-establishment candidate, Trump has shrewdly hoodwinked the media and pushed a demagogic envelope right over the cliff.

Ever since the Central Park Five incident, Black Americans have been aware of his right-wing tendencies and his rejection of “political correctness.”

In May, 1989, Trump took out a full-page ad in the Daily News voicing his impressions about the case: “How can our great society tolerate the continued brutalization of its citizens by crazed misfits? Criminals must be told that their civil liberties end when an attack on our safety begins.” The latter sentence was in large type, but his was more than a rush to judgment because the five were later acquitted.

Despite his innuendoes, personal attacks and outright mean-spirited comments, Trump continues to win primaries, and as a consequence, the GOP has gone ballistic.

The closer we get to the convention in Cleveland, the more Trump seems to gather momentum. Rather than losing steam with his nasty rhetoric, his slowness to reject endorsements from Klan members and other bigots, or a recent statement about his willingness to meet with North Korea’s leader, the candidate climbs in the polls and his focus is now on how to defeat Clinton.

“I want to make America great again,” is the mantra Trump repeatedly shouts at the rallies, several at which African-Americans have been assaulted. Parse that phrase and at bottom it means to make “America white again.”

There seems to be no limit to his provocative statements, and beyond his words is a potential administration that could make all his pronouncements, all of his negative insinuations, terrible realities.

Anytime you have a presidential hopeful who has gathered his geopolitical understanding from beauty pageants that should give you pause. All of his demonic conclusions add up to what a friend has called “trumpestilence,” a deadly, diabolic disease.

Who will Trump insult next? The American people, if they elect him.