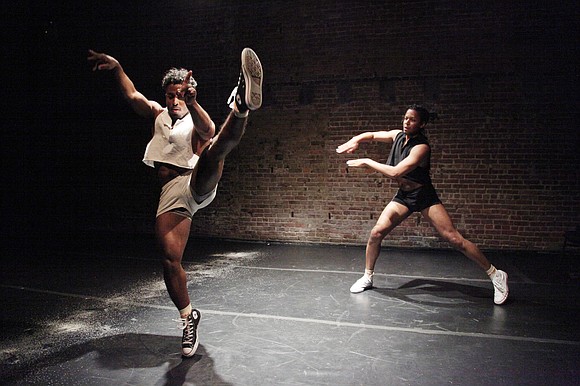 In the vast landscape of pop culture, dance has and will always be a welcomed barometer. Dance from the street to the stage is by no means a new phenomenon, but it’s surely a dependable resource for audiences, old and new. To help those not “in the know,” Jumatatu Poe, the founder and artistic director of idiosynCrazy, has been keeping folks informed.

For the 11th annual LaMaMa Moves! DanceFestival, curator Nicky Parasio explained how happy he was to “have virtuosic dancing in all theaters” and how much he “loves them all.” Poe, dancing with William Robinson, shared a program with Bryan Strimpel and Shaina Branfman of B.S. Movement. Poe’s “Let ‘im Move You: This Is a Success” (with additional material from Jerome Donte Beacham) is part of his ongoing investigation of J-Sette, or what he calls “notions of African-American exceptionalism.”

In a 2013 interview for The Pew Center for Arts & Heritage, Poe offers a more in-depth definition of J-Sette. He explains that it is “an underground dance style popular in the gay African-American club scene. Borne from all-female, Southern drill teams and often performed in domestically scaled spaces … characterized by sharp, explosive movements … in tightly executed routines.”

In “Let ‘im Move You,” this rings true. Poe is tall and Robinson is shorter, and this visual juxtaposition set the pace for their constantly changing mirroring. Their twinning included matching high-cut shorts, cut-off belly T-shirts and trendy Converse sneakers. At the top, they stepped in time with the music, spilling a white powder from a single sneaker to frame one area of the long and narrow First Floor Theatre LaMama space. They spent most of the time in this smaller area. When they did change from the framed space, they rushed to the other end, climbed the wall and pumped their buttocks. They got sweaty, breathed heavy and at the beginning of each repeating sequence, forced a smile, then began again.

There was, as Poe promised, a full load of underground dance moves, including the death drop, tipping, fist pumps, finger snapping, hip shaking, voguing, a dead stare and so much more. True to the format, before they closed, they twerked and twerked some more. Mixed into the performance were some codified forms of dance, ballet and modern for sure. Poe’s and Robinson’s delivery is what confirms this homegrown form.

B.S. Movement’s “Machine Affect,” choreographed and danced beautifully by Branfman and Strimpel, was a nonstop sequence of falling, catching and circular movements that covered the entire length of the narrow space and then in three sections grew bigger and more daring.