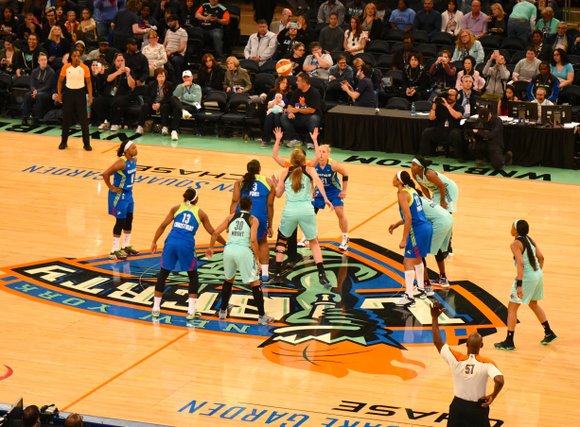 It’s only two wins and there’s a long season ahead was the sentiment of New York Liberty coach Bill Laimbeer and the players, but no one can deny it’s nice to open the 2016 WNBA season with back-to-back victories. Forward/center Tina Charles and guard Sugar Rodgers were the dominant scorers in both games, an 87-76 win over the Washington Mystics in Washington, D.C., and a 79-71 win over the Dallas Wings at Madison Square Garden.

Rodgers, who had a career-high 24 points in the game against Dallas, spent the off-season honing her game physically and mentally, often under the guidance of Liberty director of player development Teresa Weatherspoon. In addition to trips to New York during the off-season, Rodgers worked out with trainers at home in Virginia and came early for training camp. Her goal was to get bigger, faster and stronger.

“[Spoon] has definitely given me a lot of confidence in my game,” said Rodgers. “Showing me little things I can do on the court that she once did. Her, Katie [Smith], Herb [Williams] and Bill, they all had their input. Giving me the confidence. Believing in me.

“Two games in,” she added, “we’ve got something special here.”

“I’m still trying to feel my way,” said Zellous, who signed with the Liberty in the off-season. “Once the season goes on, the points will flow. Right now, I’m doing whatever I can to stay in rhythm and do whatever I have to do to help our team come out with a win.

“It’s exciting,” she added. “Fresh new start somewhere you feel wanted. That was a big thing for me. The fans cheering you on. A young team that’s up and coming is good.”

The Liberty next see action Saturday night at Madison Square Garden vs. the Los Angeles Sparks.

“There are a lot of good basketball IQ players on this team,” said Laimbeer. “Their offensive and defensive execution can get a lot better. There is a goal of this team set by Tina Charles and that is to compete for a championship. … There’s a single focus and they know what little things they have to do to get there.”