Closer than close: A tale of Hillary, Donald, the polls ... and Bernie 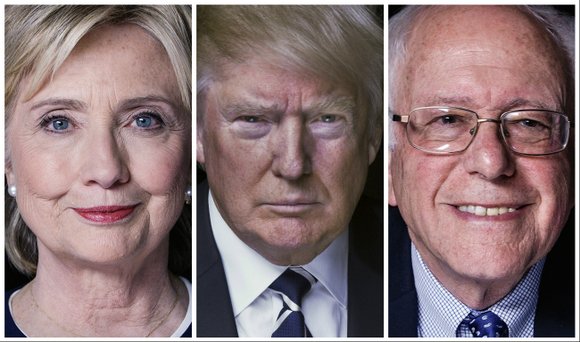 It’s early, but a potential race between Donald Trump and Hillary Clinton, two of the least popular presidential candidates in recent memory, could be closer than people think.

A May 10 Quinnipiac University swing state poll showed that Clinton and Trump were closer than many expected in those states. In Florida, Clinton held a 1 percent lead over Trump (43-42), Trump led Clinton in Ohio 43-39 and in Pennsylvania, Clinton led Trump 43-42.

When the poll was first released, it was criticized for being an outlier, but it eventually became a forerunner to other polls around the country.

“Our polls have been accurate,” Maurice Carroll, director of the Quinnipiac Polling Institute, said when speaking to the AmNews. “We showed a close race. People called us lousy after the poll came out, but we were accurate.”

“You don’t know,” said Carroll. “You can’t measure that, but my guess is that it plays quite a bit. Eventually, Sanders will get out of there. He’s not gonna get nominated. Eventually he’ll be out of the race. Until he goes out, that is a factor.”

Another person who believed that a presidential race between Trump and Clinton would be closer than people think is veteran campaign consultant Hank Sheinkopf. He told the AmNews that he was on the bandwagon early of this race being a tight one from the start.

“I said it a month ago, that it’s gonna be a close race and people thought I was wacky,” said Sheinkopf. “Ohio, Michigan, Missouri, Colorado, Pennsylvania … they’re gonna be states that Trump will bring into play like New Jersey. White, blue collar workers are watching their jobs being automated and don’t know what to do about it.”

It’s early in the race and new scandals and controversies might surface between now and Election Day. The six months between now and the night a new president’s elected are several lifetimes in campaign years. Back in 2008, a CNN exit poll showed that half of Hillary Clinton’s supporters in Indiana wouldn’t vote for Obama in a race with John McCain, with a third of Clinton’s voters supporting McCain if Clinton didn’t get the nomination.

But the dislike of Clinton wasn’t always this way. According to a Washington Post-ABC News poll, when Clinton left her post as secretary of state under President Barack Obama in 2013, her approval rating was 66 percent. That number made her more popular than Obama and Vice President Joe Biden at the time.

Carroll had an explanation for the AmNews about the dramatic change in perception of Clinton.

“When you run, a lot of people start shooting at you,” said Carroll. “When someone beloved becomes a candidate, their numbers go down.”

“With Hillary having a 30-year track record, if not more, not everybody is going to like her,” said Wright to the AmNews. “But I do believe that everybody will say that she’s capable of being president of the United States. Trump is an unknown quality. When you’re an unknown quality, it goes in your favor in the likeability factor. We don’t know what he’s going to do or what kind of president he will be. I think Hillary has a leg up.”