Malcolm X would have celebrated his 91st birthday Thursday, May 19 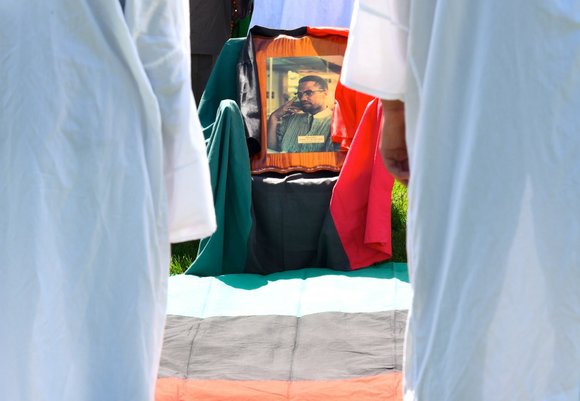 At the Shabazz Memorial and Educational Center, there was birthday cake. Droves of activists gathered at his grave site in Westchester County. Hundreds of residents took to the streets of Harlem to march.

Buses and cars assembled at the Adam Clayton Powell Jr. State Office Building at 9 a.m. for the 51st pilgrimage to the leader’s memorial.

The 30-minute journey to Ferncliff Cemetery in Hartsdale, N.Y. ended with chants and reflections by those who shared memories of the human rights activist.

Senegal native Mady Ceesay said Malcolm X is a prophet and inspires him to fight for change.

“He died for us,” Ceesay said. “That’s why I love him so much, and I will never forget him. I believe he was never dead … every person bleeds for Malcolm.”

Nearly half of the participants at the tribute were newcomers under the age of 35.

According to the chair of Malcolm X Commemoration Committee, Dequi Kioni-Sadiki, in recent years, the presence of young people has increased dramatically at these events.

Elders were offered water and some sat on lawn chairs in the shade. Mothers carried their babies. Dozens upon dozens of elementary and high school students sat on the grass and listened intently to the remembrances of the many speakers, including Professor James Smalls.

The memorial site was lined with a white rope.

The ceremony was conducted by the Sons of Africa, who wore white robes and turbans. A pan-African red, black and green flag was draped around a framed photograph of Malcolm X. African drummers and maraca players performed lamban-style rhythms to accompany the rituals.

Julien Terrell, lead organizer of the Brotherhood and Sister Sol organization, a group that provides long-term support services to youth, said over the past two years, he has brought groups of young people to the memorial.

“Malcolm put a lot of work in Harlem and inspired a lot of folks to be the creative visions for those of us who were younger to step into,” Terrell said. “For those who work with young people it is important to know that they need to know the history, but they are [also] the ones who are carrying on that history.”

Between 1 p.m. and 4 p.m. in Harlem, there were no coffee breaks at Starbucks or shopping trips to H&M.

Randolph Garcia, the store manager of Sprint at 209 W. 125th Street, was one of more than a dozen managers to close their stores for Malcolm X’s birthday. Garcia was given notice a month in advance to shut down the store.

“We support the community,” Garcia said.“Any community activity that would hinder or have our customers feel some type [of distress], we always want to make sure that’s not the case. We will participate in anything that we can.”

Kioni-Sadiki said she agrees with shutting down established businesses, but was concerned with activists who were closing local Black-owned markets.

“One thing that is disturbing to me is that they were telling the vendors that they couldn’t sell,” Sadiki said. “Black vendors are quite different from Verizon or Ashley Stewart or the Mac store. They are everyday people trying to survive.”

Most of the stores complied, however, and the December 12th Movement organizers maintained that the three-hour shut down was merely a show of respect for the reverence of the day.

Thousands of people, along with Malcolm X’s daughters, sister, nephew and niece, rejoiced in the internationally acknowledged day of reflection and homage. People attended several events around New York City to declare “Happy birthday Malcolm X!”’ on what would have been his 91st birthday.