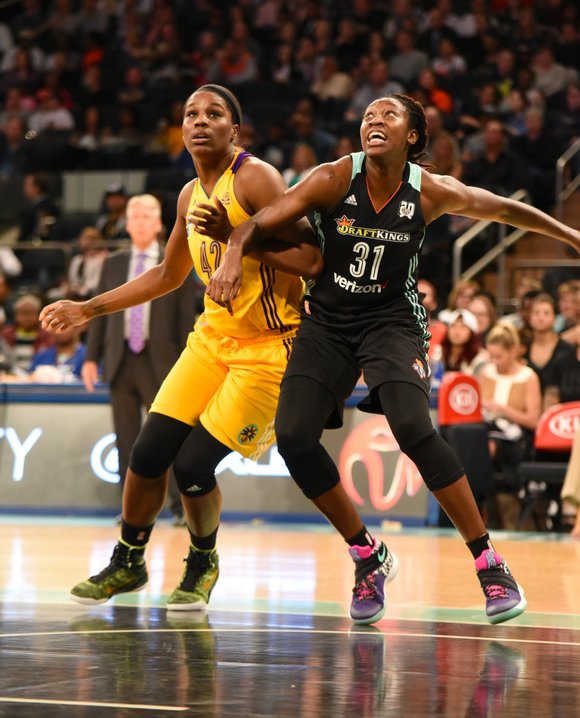 For two games in a row, the New York Liberty held a lead over its opponents for most of the game only to fade in the final minutes and crumble in overtime. This loss puts the Liberty at two wins two losses for the season, with questions about how the players can execute better and be a more cohesive unit.

In last Saturday’s 79-72 loss to longtime adversary the Los Angeles Sparks, two former Liberty players returned to Madison Square Garden. For Rutgers graduate Essence Carson, a Liberty player from 2008 to 2015, it was a bit awkward to be on the visitors’ bench, but she shook off her nerves.

“There’s a lot of energy here. The fans are still great. They gave me a warm welcome,” said Carson, who received a nice tribute video on the Jumbotron. “[The Sparks] didn’t come out as strong as we would like, but we stayed mentally focused and pushed through in the end.

“It’s still early in the season,” she added. “We have a lot of growing to do. We’re still building chemistry. … It’s great that we can start off so well. That just shows our potential.”

For Ann Wauters, a Liberty player in 2004 and ’05, it’s just nice to be back in the WNBA. Although she was the top WNBA draft pick of 2000, she has only played sporadically in recent years. Her last stint was in 2012 with the Seattle Storm. After that she decided to take summers off to be with her family. She and her longtime partner have three children.

“In my mind, it was like the WNBA chapter was over,” said Wauters. A call from Sparks’ coach Brian Agler sparked her desire to return. “I see a lot of potential in this team. If I can be a part of that … it can be a special season.”

Tuesday’s 85-79 loss to the Atlanta Dream marked the return of Swin Cash to the Liberty lineup. Waived toward the end of training camp so the Liberty could meet WNBA salary cap requirements, she’s now back in uniform and signed for the rest of the season.

The Liberty return to the Garden for two games next week—Tuesday night against the reigning WNBA Champions, the Minnesota Lynx, and Friday against last year’s Eastern Conference champions, the Indiana Fever.