A spiritual reunion between Miles and Trane 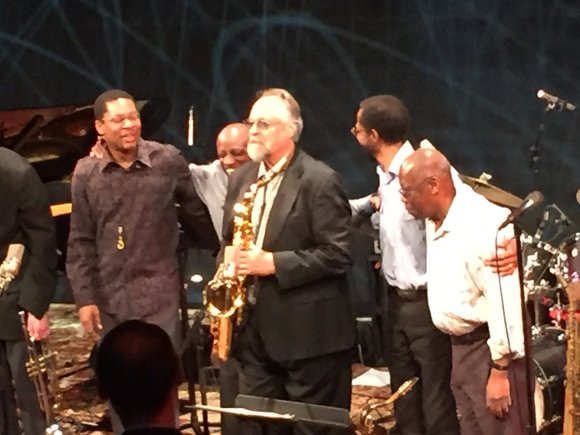 Fortunately, for those unable to be two places at one time, there were alternate dates to catch each event, and they were equally powerful.

There were several stellar moments from the 15-piece orchestra during its reading of a dozen or so Davis chestnuts. Trumpeter Marcus Printup applied his own particular flavor and arrangement to “My Funny Valentine,” choosing not to mimic Davis but to treat the tune with a special turn of sweetness. A thunderous ovation was his reward.

On “Dear Old Stockholm,” always a favorite by Davis and Coltrane, Printup was joined by Elliot Mason (trombone), Victor Goines (tenor saxophone) and Julian Lee (tenor saxophone). Lee’s solo contained just the right amount of appreciation for the past and a nice step into the moment. Still a student at Juilliard, Lee has a most promising future.

You know it’s a superb orchestra when Marsalis limits his brilliance, but limitation was not the order of things when Lovano and crew conjured the heavy spirit of Coltrane. With Lovano’s tenor or soprano saxophones leading the way, Coltrane was wonderfully present. From the opening smear of notes from Geri Allen’s piano, the spray of sound from drummers Andrew Cyrille and Brian Blade and bassist Reggie Workman’s Arcos, Trane’s “A Love Supreme” floated over the room, matching the gradual spread of sunset through the large windows.

It was Trane’s “Welcome” and from this first invitation to the volcanic conclusion, with Ravi Coltrane offering his finest solo, the great musician and his recordings were recalled, including “Spiritual,” “Coltrane Plays the Blues,” and, most fittingly given the room’s location, “Central Park West.” One of the most memorable exchanges occurred between Allen and Blade on “Spiritual.” Each of Blade’s fierce attacks—and he had more than a few—were answered and embellished melodically by Allen. Only the interplay between Lovano and Ravi Coltrane, with an occasional harmonic blend from trumpeter Tom Harrell, rivaled their dynamic dialogue.

The other Coltrane, Alice, was not forgotten, and Allen’s composition that honored her greatness was a study in chromatics, a constant cascade of notes, all of them reminiscent of Alice’s style and eloquence.

Workman and Cyrille were the bridges to the days and nights when Coltrane delivered his musical sermons of peace and love, and Workman, with practically every note from his bass, back transported you to the Village Vanguard. That memory was given additional nimbus by Blade’s Elvin Jones-like energy.

There were moments during the tribute to Miles and Trane in which their legacies almost came together at Jazz at Lincoln Center, especially for those patrons with communing capabilities, standing somewhere between The Appel Room and the Rose Theater.