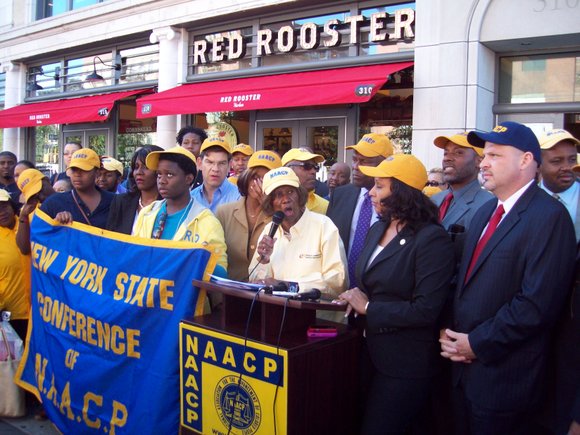 The call for a moratorium on charter schools by the NAACP is a case of “Throwing the baby out with the bath water.” While most Black folks are concentrating on Hillary and Donald, the largest and oldest “Colored” organization approved an internal resolution calling for a halt to the “expansion of charter schools” until those schools meet criteria set forth by the NAACP.

The NAACP lacks the power to enforce its resolution, but their call for this draconian measure does come with the familiar stench of other positions they have taken—and not taken—because of political and, of course, economic reasons, the latter of which seems to be the driving force behind this latest move.

One of this country’s leading educators, Dr. Steve Perry, who has operated charter schools for years and recently took over the new charter school opened by Sean Combs, Capital Prep Harlem, in New York City, had this to say: “The NAACP national headquarters has received a significant amount of money from the teachers’ union. The only organizations to call for a moratorium on charter schools in particular, because they are non-union, are the teachers’ unions.”

Perry went on to call the resolution, “absurd.” He further stated, “They couldn’t be more out of touch if they ran full speed in the other direction…the national [NAACP] is out of touch even with their own chapters.”

Shavar Jeffries, Democrats for Education Reform, said, “Indiscriminately targeting all charter schools…while ignoring underperforming district schools undermines the quality and integrity of our entire education system. We should be fixing what’s broken and expanding what works, not pre-empting the choices of [Black] parents…”

Calling for a moratorium is indicative of the NAACP’s disregard for existing charter schools established, funded, and operated by Black people. The use of scare tactics, such as “privatization,” under the guise of concern for students, is either disingenuous or ignorant. Charter schools are about creating better options for education—they provide a choice.

I know and have spoken with several esteemed Black educators and operators of charter schools. Amefika Geuka, who founded and ran the Joseph Littles Nguzo Saba School in West Palm Beach, Florida for 16 years, was the largest Black employer of Black people in the county. He used his own funds to sustain the school and fought resistance by the district to keep his school opened despite the success of his graduates in college. One former student is now in law school and is the President of the Student Bar Association.

Another long-time friend and charter school founder is Kwa David Whitaker, an attorney in Cleveland, Ohio, who has managed as many as twelve schools. He shared with me the following: “It is the traditional system that has destroyed our children and nation. Putting this intense focus on charter schools is only an attempt to keep the focus off of the continuing ineptitude of our nation’s traditional public school system.”

Black parents spoke out against the NAACP’s decision by protesting during its convention. Roland Martin, News One Anchor, questioned NAACP Washington Bureau Chief Hillary Shelton on whether the NAACP had invited any of those parents to speak or if it had called upon Black charter school leaders to give their input before the resolution was passed. After asking three times without getting an answer, Martin answered it himself: “NO.”