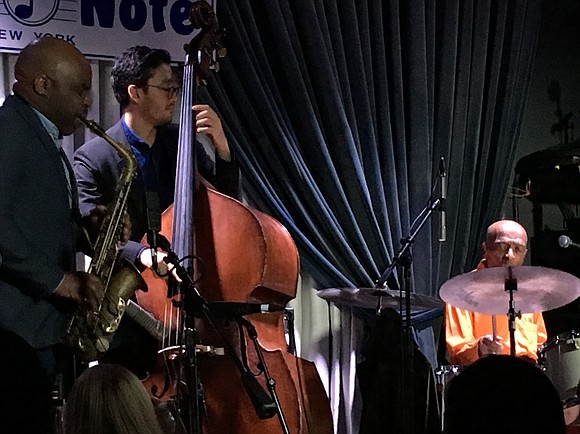 As the Black Panther Party celebrates its 50th anniversary throughout the United States, Bobby Seale recently stopped at the Schomburg Center for Research in Black Culture. He mesmerized an enthusiastic audience with corrected untruths and future goals for the people.

The event was entitled “Black Power 50 Talks: Bobby Seale and Stephen Shames.” Shames began photographing the organization in 1967. He was a student at the University of California, Berkeley when he first met and photographed the Panther chairman at an anti–Vietnam War rally.

Seale became his mentor and Shames became the party’s photographer. He remained with Seale through his campaign for mayor of Oakland in 1973.

The conversation with documentary filmmaker Byron Hurt also included their joint book venture “Power to the People: The World of the Black Panthers” (Abrams Books). It features memorable images accompanied by Seale’s in-depth commentary. “This book represents the truth and authenticity of the Panthers,” stated Seale.

Seale made it clear the Black Panther Party wasn’t based on Marxism or fascism. “If you read our Ten-Point Program, it is evident it is not about that,” he said. “That rumor started when Huey and I started selling the ‘Little Red Book, Quotations from Chairman Mao Tse-Tung.’ I told Huey we could sell them and make money for the Panthers. Man, it paid off. I paid 20 cents per copy and we sold them for $1 at rallies and our chapters. Laughing, he added, “We never read the book until months later.”

Seale began organizing the party in 1964 and says he quit his job with the city as an engineer after seeing Dr. Martin Luther King Jr. speak at a rally. “The BPP was never about violence,” stated Seale. “The guns were our defense against the police and their brutality. You had to be disciplined in my army. We knew all the gun laws and more, even the correct lawful response of police officers.”

He recited these city laws with the quickness of a riveting bullet penetrating the body of an unarmed Black man and the preciseness of a whip slashing the back of a female slave who refused her master.

“It was never about the guns,” Seale explained. “It was about political activism and our free community programs.”

Seal continued, “We can never change laws if we are not in power. We need majority representation in the seats of government. As we grew, I was looking to build a political electoral machine. Black Lives Matter and climate change organizations are our successors. Hopefully, they will stay involved politically on a consistent basis.”

Slavery, one of the most horrific crimes on the face of the Earth, is a crucial fabric of America. It is this contemplated abomination that has kept this country racially divided over

Last weekend the slavery empire built on terrorism and the torture of Black people, politics and economics traveled through time to sprout the heart-wrenching truth through the words of “The American Slave Coast: Live,”