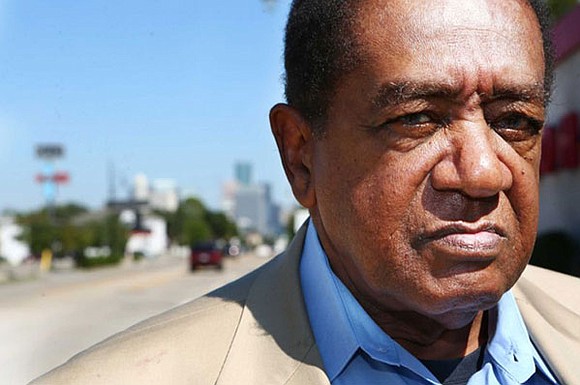 Activists from throughout the metropolitan area packed into Harlem’s Schomburg Center for Research in Black Culture (515 Malcolm X Blvd. and 135th Street) Thursday evening (Oct. 27) to witness legendary revolutionary and original Black Panther Party for Self-Defense co-founder Bobby Seale divulge some very relevant history. He was in town promoting his book with photographer Stephen Shames, “Power to the People: The World of the Black Panthers.”

Seale, who just celebrated the 80th anniversary of his birth five days earlier, touched on a variety of topics throughout his two-hour presentation, moderated by award-winning documentarian Byron Hurt.

“I’ve been trying to do a film [about the BPP], and they keep interrupting me,” Seale said. “They don’t want me to tell the real story. In my film, I would indict COINTELPRO, Richard M. Nixon, John Mitchell and others who led the major attacks against my organization, particularly in the year 1969.”

He continued, “When I researched the Watergate tapes, I found it! In the voice of Richard M. Nixon: ‘Now J. Edgar, you gonna move on these Black Panthers ... What have you been doing about this? I really want you to get rid of these Panthers.’ It’s the voice of Richard ass M. Nixon, the president of the United States of god damn America giving directions to [FBI Director] J. Edgar Hoover to get rid of the BP! In that year, my Black Panther officers were attacked all across this country, over 20 officers ... It was a concerted effort.”

The BPP chairman went on to explain how the U.S. government-controlled mass media put out propaganda to stereotype the BPP as ignorant, violent thugs. However, the demand for change coming from the youth of that day was greater than the government-imposed fear.

“Before Martin Luther King was killed, I only had 400 members up and down the West Coast,” Seale confided. “There were no chapters or branches across the country. I’m telling you. He was killed and young Black brothers and sisters from all over this country flooded my organization. [It] jumped from 400 members to 5,000 members and 49 chapters across America, and I practically went to every chapter.”

Being that pop singer Beyoncé displayed the BPP’s leaping cat logo during her halftime show at the Super Bowl earlier this year (for more than 30 million viewers to witness), and that the organization just commemorated their 50th anniversary Oct. 15, much attention has been paid to the Oakland, Calif.-based political organization.