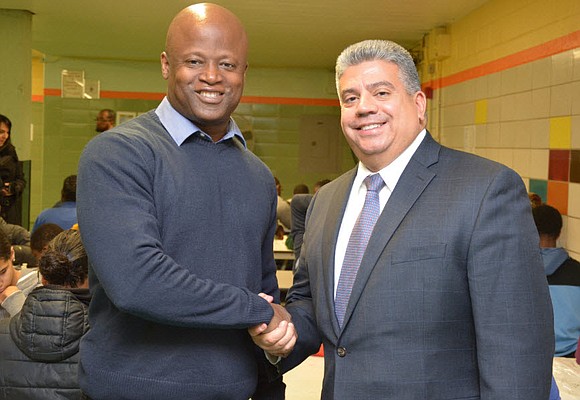 Gonzalez said, “It is an honor for me to carry out DA Ken Thompson’s vision for a chess partnership with the Police Athletic League that will benefit hundreds of young people, teaching them not only to carefully consider their next move in chess, but will also help them think strategically about their next moves in life. We couldn’t have a better leader in this effort than Maurice Ashley, who is not only a chess grandmaster, but a native Brooklynite and wonderful role model.”

Watts said, “We at PAL are thrilled to be able to offer a high-quality educational program to our children. We are grateful to the Brooklyn district attorney’s office for their support, and to the world renowned chess grandmaster Maurice Ashley for his invaluable expertise. We also wish to recognize the contributions of the late Brooklyn District Attorney Kenneth Thompson, whose vision and commitment were central to making this chess program a reality.”

Brooklyn native and International Hall of Fame chess grandmaster Ashley said, “It’s a real pleasure to be partnering with the Brooklyn DA’s Office and the PAL to bring chess to kids in my hometown. As a child who was raised in Brownsville and who found chess at Brooklyn Technical High School, it feels like I have come full circle. Learning chess has many benefits to growing young minds, and the children of our great borough stand much to gain from this program.”

The chess program, created by Ashley, will take place as two sessions per week over the course of 15 weeks on-site at PAL’s East New York and Bedford-Stuyvesant locations. The program kicked off last week and will continue through August 2017, with two cycles during the school year and one summer cycle.

The program is open to third- and fourth-graders in Bedford-Stuyvesant and to grades five through eight in East New York. Approximately 300 students are expected to take part in the program, which is being funded by a grant from the Brooklyn district attorney’s office.

The chess instruction will reinforce logic and critical thinking skills while promoting a love of the game. At the end of each cycle, participants will compete in a centerwide tournament, which will culminate in a Brooklynwide competition.

The idea for the program came from late Brooklyn District Attorney Ken Thompson, whose son is an avid chess player, during a conversation between himself and PAL Vice Chairman John Catsimatidis. Thompson and Catsimatidis were discussing possible partnerships earlier this year when Thompson suggested a chess program that would teach participants to think about their next move, a quality that will serve them in their life choices as well.

Ashley is the first African-American international grandmaster. He was recently inducted into the International Chess Hall of Fame. In addition, Ashley, the author of “Chess for Success,” will be teaching some of the classes.