‘This is a conspiracy to commit murder’ 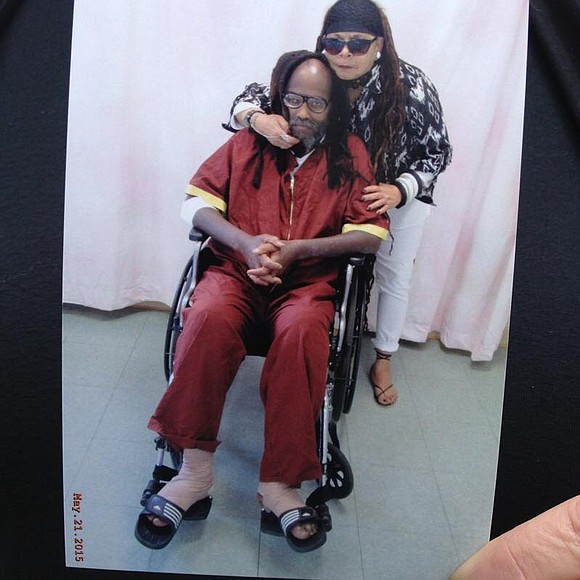 “They’re still trying to kill Mumia,” stated supporter and MOVE Organization’s Minister of Confrontation Pam Africa. “The power of the people is needed again to raise awareness about Mumia’s condition and getting him treatment.”

On Aug. 31, the Abu-Jamal vs. Kerestes federal court decision declared it “unconstitutional for the Department of Corrections to refuse to give hepatitis C-infected prisoners with medicines boasting a 95 percent cure rate.”

According to reports, Abu-Jamal has recently “experienced a resurgence in hep C symptoms while incarcerated at Mahanoy prison.” He is said to be “experiencing diarrhea for almost two months, severe itching all over his body and is experiencing general disorientation.”

“His memory is foggy, it sort of comes and goes,” revealed Africa. “He’s losing weight.”

Because he is not receiving antiviral medication to treat his hepatitis C in prison, Abu-Jamal’s supporters are very concerned.

“They still haven’t done it!” Africa said. “This is a conspiracy to commit murder. Prison officials have lied to make sure Abu-Jamal doesn’t get the medicine. … The governor knows, the prison officials know.”

Additionally, Abu-Jamal’s attorneys recently filed a new lawsuit citing the Supreme Court’s Williams v. Pennsylvania ruling, which specifies that “a prosecutor in a case cannot sit as a judge over the same defendant he prosecuted.”

If the suit is successful, all court decisions in Abu-Jamal’s case dating back to 1998 would come under scrutiny because his supporters would question why former Pennsylvania Supreme Court Justice Ronald Castille refused to recuse himself, given that he prosecuted Abu-Jamal’s case three decades earlier.

“He’s not at death’s door, but he’s now developing all the same symptoms as when he had to be hospitalized last year,” Africa stated. “That’s why we’re so concerned. Hepatitis C is going to be a slow painful death.”

Supporters have scheduled a Dec. 9 protest in Philadelphia for the 35th anniversary of Abu-Jamal’s attempted murder by Philly’s finest, and his arrest.