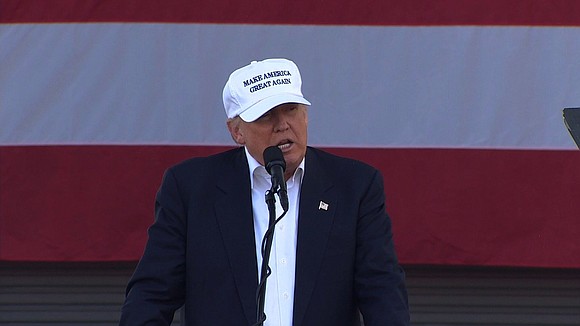 A day after Trump was elected, some students at Michigan's Royal Oak Middle School started chanting in the cafeteria: "Build the wall! Build the wall!"

A video of the chanting, which has been viewed millions of times on social media, appears to stop after a girl mentions the incident is being recorded.

"We are working with our students to help them understand the impact of their words and actions on others in their school community," the superintendent said in a statement Thursday.

"Our school district and each building in it works every day to be a welcoming community for all, inclusive and caring, where all students know they are valued, safe and supported."

The day after Trump's victory, someone painted racist messages referencing the election on a wall in Durham, North Carolina.

"Black lives don't matter and neither does your votes," the message said, according to CNN affiliate WNCN.

On Thursday, crews came to paint over the graffiti.

Phyllis Terry, whose family owns the JC's Kitchen restaurant next to the graffiti, told the affiliate she was heartened by the effort to cover up the message.

"I am amazed. I am really touched this morning that the community has rallied together," she said.

Authorities at the University of Louisiana at Lafayette discovered Wednesday morning that somebody chalked the words "Trump," "Build wall" and "[Expletive deleted] your safe space" in front of the library, The Vermillion student newspaper reported on Twitter.

The Anti-Defamation League has decried Nazi-themed graffiti that appeared in South Philadelphia.

"We are horrified by the appearance of hate graffiti on a storefront in South Philadelphia," said Nancy K. Baron-Baer, the organization's regional director, in a statement posted Wednesday on the group's website. "Swastikas and the Nazi salute send a message of intolerance and hate to the entire community. The fact that today is the 78th anniversary of Kristallnacht adds another layer to this already sickening act."

Kristallnacht was when Nazis rampaged through German towns on November 9-10, 1938, smashing stores and windows of buildings owned by Jews. The name of the incident, also known as "Night of the Broken Glass," refers to the shards of glass left on sidewalks.

Baron-Baer said the group views the graffiti as an isolated incident but stressed that "we cannot allow this behavior to become routine."

Philadelphia police reported several incidents in which walls and vehicles were defaced. So far no arrests have been made.

The words "Sieg Heil 2016" and "Trump" -- with a swastika substituted for the T in Trump -- were spray-painted on a building's glass window on South Broad Street, police said.