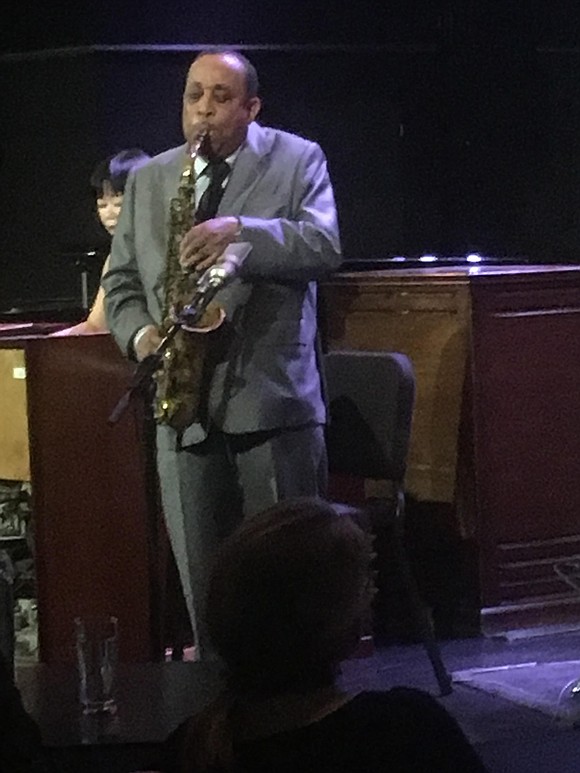 No one swings harder than Lou Donaldson on the alto saxophone, as he demonstrated last week celebrating his 90th birthday at Dizzy’s Club Coca Cola. As usual, his smooth performance required multiple standing ovations, including one as he took the stage.

The opening tune “Blues Walk,” a blues funk base, exploded high in the stratosphere as the organist laid down a rolling medley that intersected with Johnson taking his guitar rhythms high, and Tainaka’s sticks came as blazing thunder.

After the tune Donaldson stated, “I hope it sounded all right. I couldn’t make a sound check because I had to go play my number.”

Donaldson, dressed in his signature dark suit and tie, has a knack for telling jokes, offering inside tidbits on such cats as Thelonious Monk and Charlie Parker and introducing his songs with a humorous flair.

“This next song is real fast and freaky but not that freaky,” said Donaldson with a laugh. “It is not recommended for rappers. It swings too hard. It is called ‘Fine and Dandy.’” This tune was followed by his gravelly voice on his repertoire staple, “Whiskey Drinking Woman,” with his own improvised verses. He noted, “This is suffering music from down home in North Carolina. If you never suffered, you can’t understand this music.”

Donaldson’s nickname “Sweet Papa Lou” refers to the sweet sound his horn makes, particularly on ballads, as was witnessed on “What a Wonderful World.” His repertoire ran from straight-ahead to bebop to his favorite blues enhanced with riveting funky soul rhythms.

With his sweet tone, Donaldson quickly became a first call for musicians such as Milt Jackson and Thelonious Monk. In the early 1950s, he was a member of Art Blakey’s Jazz Messengers while still in his 20s. His reputation soared as a bandleader and composer when he signed with Blue Note Records in 1952 and recorded “New Faces New Sounds,” which featured Clifford Brown, Elmo Hope, Percy Heath and “Philly” Joe Jones.

He recorded with Blue Note until the 1980s (recording more than 50 albums) turning out such classic albums as “Alligator Boogaloo” (1968), the timeless hit that is a mainstay in his repertoire; “Good Gracious!” (1963); which has one of the most memorable covers ever photographed for the record label; “Lou Takes Off” (1957), with Curtis Fuller and Donald Byrd; and the live recordings of “A Night at Birdland” (Vols. 1-3, 1954), with Art Blakey Quintet.

Donaldson’s love affair with organs has continued since recording more than 10 Blue Note albums with Jimmy Smith, his recordings and tours with Jack McDuff and his on-going relationship with Dr. Lonnie Smith.

“I met Lou in Harlem at Showman’s in 2007,” said his organist Tsuruga. “His band members at that time, drummer Tainaka and Dr. Lonnie Smith, were my mentors. I have been playing with Lou for the last seven years, it has been so great and Lou is the best.”

Tainaka has been playing for Donaldson for 30 years.

“Lou was 59 when we met in Harlem at Sutton’s on 145th Street,” said Tainaka. “Dr. Lonnie Smith was his organist then. The gigs were three nights per week and guys like George Benson and Jimmy Ponder often jammed with us. This is a very special night.”

The guitarist Eric Johnson met Donaldson while he was still in high school in Pittsburg. “I had the opportunity to travel with him and Jack McDuff that was my beginning as a jazz musician,” said Johnson.

The NEA Jazz Master’s birthday brought his family from all points, including his daughter Dr. Carol Webster from Fort Lauderdale, Fla., his grandson from Chicago and his cousins from Philadelphia.

His friend, vocalist George V. Johnson from Washington, D.C., joined Donaldson onstage for an engrossing version of Monk’s “Now Is the Time.”

The evening’s host was his good friend and jazz “professor” Phil Schapp.

Donaldson is one of the great alto saxophonists in jazz. “No fusion, no confusion just great music from Sweet

Cuban musicians have added to the jazz vocabulary since 1947, when Dizzy Gillespie became involved with the conga player Chano Pozo and the trumpeter/bandleader Mario Bauza, who influenced the movement of Afro-Cuban music.

Today with more Cuban musicians coming to New York, they are extending the colorful tapestry of their on-going contributions. Most recently Jane Bunnett and Maqueque shared their tropical journey with a sold-out audience at Birdland jazz club on a Tuesday night, which is unusual. The club’s manager noted, “When Maqueque shows up, the room is packed.”

The ensemble is an all-female ensemble, which makes it unique. They are all Cuban with the exception of bandleader Bunnett, a Canadian soprano saxophonist and flutist known for her Afro-Cuban musical connection of playing in Cuba and bringing Cuban musicians together in various bands.

This ensemble (octet) features a group of very talented young ladies: the pianist and vocalist Danae Olano, the bassist and vocalist Cecila Jimenez, percussionist and vocalist Magdelys Savigne, drummer Yissy Garcia (we met in Cuba when she was a teenager playing late night jam sessions, and last year she performed at the Havana Jazz Festival), violinist and vocalist Elizabeth Rodriguez and special guest vocalists Melvis Santa and Dayme Arocena.

Their repertoire romped through classical verses mixed with jazz melodies. Other tunes were rooted Cuban and African rhythms and swinging mambo, salsa melodies that made it very difficult for the audience to restrain themselves from dancing in the aisles.

Their English version of Donny Hathaway’s “Song for You” was stunning. The background vocals were sung in Spanish with a crying soprano sax. The song, which is on their latest CD “Oddara” (Linus Entertainment), is required for listeners interested in a musical journey that extends the sound of traditional Cuba and its African roots.