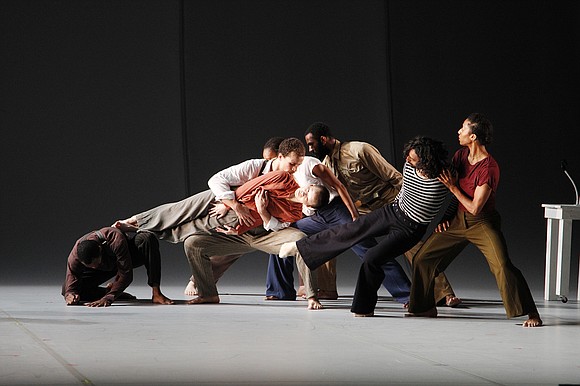 There is more dancing, less talking but equal amounts of emotional jolts in Bill T. Jones/Arnie Zane Company’s “Analogy/Lance: Pretty aka The Escape Artist,” Part II of The Analogy Trilogy series (Oct 25-Nov. 6) at the Joyce Theater. Like Part I, the dancers (Antonio Brown, Rena Butler, Cain Coleman Jr., Talli Jackson, Shane Larson, I-Ling Liu, Jenna Riegel, Christina Robson and Carlo Antonio Villanueva) were given the task of making real the words of the storyteller (Pretty) and interviewer (Jones), all the while interweaving movement. Lance Theodore Briggs, LBT or Pretty, is Jones’ nephew. Microphones switch from person to person as easily as the voices, the movement and the persona. Shifting equally throughout was Bjorn Amelan’s décor of moving parts, constructed and deconstructed by the dancers to help recreate places where the stories lay, plus captions ran across the back wall: a year (“1978”) or an event (“Shadow Life”), to help chronicle the time. Though “Analogy/Lance” is another dark story, it’s spicy. Jones and Associate Artistic Director Janet Wong’s 80-minute testament of Pretty’s tumultuous life story manages to include his many personas: dancer, model, songwriter, choreographer and male escort, who lived in the underworld of the late 80s and early 90s club and sex trade culture—these people, we learn, are Pretty.

Sex, drugs and music are barometer markers in Pretty’s life, and from the top we are voyeurs for this truth. The cast don Adidas hoodies and sweats for Pretty’s party while Brown/DJTonyMonkey spins “house” tunes. If it weren’t for the formality of a stage, this party was, as Pretty appealed, for everyone.

Later, really close-fitting, blinged-out performance gear substitute for hoodies, and a lullaby or what seemed like Gregorian chants substitutes for “house” music. This performance was a bumpy ride. Pretty’s world continually zigged—dancing from the heart, wearing his love for dance and companionship on his sleeves, and zagged—barreling through disappointments, resolving to drugs for healing or comfort.

Kudos to each of the performers for managing the texts, the staging, the many moving parts and the dance all at once, to tell this heart-wrenching story. They are beautiful. Coleman and Jackson brilliantly interchange the role of Pretty, and Rigel’s fierce hooded character further confounds the mystery of Pretty’s many lives. The choreography is by Jones with Wong and the Company. The musicians are Nick Hallett and Matthew Gamble (Lance). The first part of the series, “Analogy/Dora: Tramontane,” tells the story of 94-year-old French-Jewish Dora Amelan, a nurse and social worker during World War II, and the mother of Bjorn