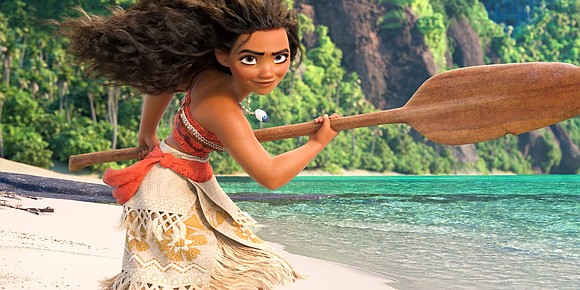 Polynesian princess Moana will quickly become as popular as Cinderella as the revival of Disney begins to reflect the global communities. The film is as exciting as “The Little Mermaid” and “Aladdin,” which are also directed by Ron Clements and John Musker.

It’s interesting and comforting to read in the production notes that the creative team spent long stretches of time learning about the stories told by the Pacific Islanders. The result is an exciting and authentic story that speaks of truth that’s told through the eyes of the spunky Princess Moana (voiced by Hawaiian actress Auli’i Cravalho), the daughter of a Pacific Islands chieftain, who doesn’t yet see herself as a fearless leader.

Early in her life, just a wobbling toddler, the sea chooses her and the call continued to stay deep inside her mind and heart.

She grew up listening to the stories of the Polynesian shape-shifting demigod Maui (Dwayne Johnson), who stole the heart of the island, and being warned, as all kids were, to never venture past the safety of the reef.

“Moana” keeps the very best of the tradition that has made Disney the leader in animated fairy and folk tales, and yet, it has a terrific modern touch.

The petite Moana stands just as tall as the huge Samoans and exhibits her fearless heart at a very early age. The demigod Maui is always described as wanting to be adored by mortals, which is the basis of Moana’s father enforcing the rule that no one from their tribe is allowed to venture beyond the shallow reef that encircles their island, Motunui.

Something magical happens and it moves Moana into the deep ocean itself, which behaves with a protective love —pulling back from the depths and depositing her back into her boat.

Directors Musker and Clements, whose gift for hand-drawn

animation translates beautifully to the realm of CG, make every moment magical.

From her very first contact with her destiny there are two exceptional original songs. The first conveys her father’s law, “Where We Are,” and the other voices Moana’s fearless heart, “How Far I’ll Go.” Both songs are an interesting collaboration between longtime Disney music guru Mark Mancina, Opetaia Foa’i, the lead singer of South Pacific fusion band Te Vaka, and “Hamilton” composer-lyricist Lin-Manuel Miranda.

Water is life. Life is water. In Maori the connection is never misunderstood, connecting the bond between the two.

Moana must save her people and that means sailing on a quest to return to its rightful owner the “heart of Te Fiti,” a carved, jade-like stone stolen years earlier by the impulsive and vain demigod Maui.

Here is where the film is even more impressive. The result of the research trips to the region have shaped the film’s design, and Maui is a thoroughly original character. In a genius move, his massive size serves a canvas for elaborate full-body tribal tattoos, including a “Mini Maui” silhouette whose Jiminy Cricket-like advice is delivered via pantomime (instead of perching on his shoulder, Maui’s conscience is drawn directly onto his skin).

She feels real, dear Moana, with expressions reflecting all the subtleties of performance possible in hand-drawn animation, and then liberated by the vast possibilities of CG. The virtual camera sweeps freely, surrounding the characters in exciting and dynamic ways.

One of the best musical moments is wrapped around a disco-infused musical number, “Shiny,” performed by Jemaine Clement in the guise of a glittering monster crab.

Set mostly on the open sea, the story never has a dull moment. There’s comic relief in the side-kick Heihei, a very stupid chicken, who’s there to supply laughs.

On the wide sea that loves her, Moana gets in touch with her people’s ancient seafaring ways, helping Maui to retrieve his magic fishhook, which allows him to shape-shift and face an army of coconut pirates and Te K, a supernatural beast with a volcanic temper.

Girl power is everywhere. Moana takes control of her own destiny. There is something to be celebrated in the power of the ocean when coupled with the female energy, and Moana herself sings in the film, “no one knows, how far it goes.”